A Pigeon Sat On A Branch Reflecting On Existence 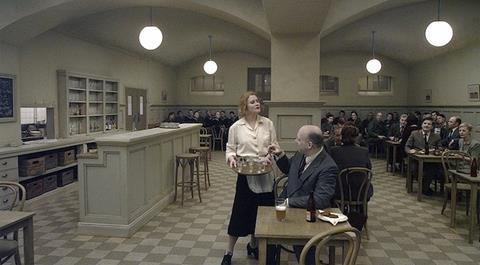 The final part of Swedish auteur Roy Andersson’s ‘Living’ trilogy is a magnificently droll, compassionate, melancholic reflection on the absurd human comedy. Cast in the director’s by now familiar fixed-camera style, with a washed-out colour palette that runs the gamut of beiges, greys and pale greens and blues, the film presents 39 meticulously composed tableaux vivants that range from simply observed moments of life to elaborate dreamlike fantasies with dozens of extras in period dress. It’s been seven years since You, The Living and 14 since the first part of the trio, Songs From The Second Floor, but for fans of Andersson’s deadpan humour and unique style it will have been well worth the wait.

Sure, it’s a sedately paced experience, akin to a slow walk through a gallery where every artwork merits a long, cool look. But it will still be one of the arthouse highlights of the year for cineastes in many territories, and distributors who have picked up the previous two will be relieved that they can finally get the box set DVD out.

Even those who dismiss Andersson’s more recent oeuvre as akin to a series of Monty Python sketches scripted by Ingmar Bergman are given something new and more substantial to chew on here in the form of a sad comic couple of novelty-item salesmen who give ‘Pigeon’ a narrative backbone and represent one of Andersson’s greatest character creations to date. They look sure to take their place in the pantheon of comedy double acts, somewhere between Laurel and Hardy and Vladimir and Estragon out of Waiting For Godot. Another novelty, in just two of the scenes, is an attempt to embrace not just human fallibility and pettiness but the extreme cruelty of genocide and animal experimentation.

With full support from funding bodies that have sometimes shunned his work in the past, Andersson was able to dedicate four years to designing, storyboarding and shooting the film in his own Studio 24 facility in Stockholm. The absorption pays off in a work that joins Mike Leigh’s Mr. Turner in using cutting edge hi-definition digital technology (a first for Andersson) to push back the boundaries of painterly composition in cinema. Sure, it’s a sedately paced experience, akin to a slow walk through a gallery where every artwork merits a long, cool look. But it will still be one of the arthouse highlights of the year for cineastes in many territories, and distributors who have picked up the previous two will be relieved that they can finally get the box set DVD out.

A few of the 39 scenes are grouped into clusters – like the “Three meetings with death” at the beginning, one of the finest involving a cruise ship passenger who has a heart attack after paying for his meal at the self-service restaurant. What do you do with a dinner that has been paid for by a man who is now dead? The living continue to ask such questions, and it’s the tension between the trivial and the infinite that gives Andersson’s film such power. Other vignettes involve a plump flamenco teacher molesting one of her male students, a sea captain troubled by a cancelled appointment, two lovers smoking near an open window, and a talent night at a school for children with special needs. Whenever we see a character on the phone, the same line is repeated to their unknown interlocutors: “I’m happy to hear that you’re doing fine”.

One of the most lavish scenes involves a neighbourhood bar in a desolate modern suburb with an industrial view. All of a sudden, men in elaborate 17thcentury dress appear outside the window, marching in formation, and before long a delicate, melancholy King Charles XII of Sweden has cantered in on horseback to request (via his minions) a glass of sparkling water, and to make advances at the young barman who pours it for him. Eight tableaux later, we’re back in the bar – but this time witnessing the ravaged remnants of Charles’ army returning from the battle of Poltava.

Another historical vignette – later revealed to be a dream, perhaps – provides the film’s most disturbing image, as a series of shackled black natives are ushered into a huge brass cylinder with funnels projecting from it, a kind of steampunk gas chamber, under which a fire is lit by British colonial officials. It is a machine, we slowly realise, that makes strange ethereal music out of unimaginable human suffering as it slowly revolves – and an audience of elderly notables in formal dinner dress shuffles out from a mansion to witness the concert.

But it’s Jonathan (Holger Andersson) and Sam (Nils Westblom) who provide a narrative thread and character focus that the first two films in the trilogy mostly lacked. Made up, like many of the characters, in thick pancake that carries a whiff of the circus ring, they are lugubrious travelling salesmen of novelty items, but have only three to offer: a set of vampire teeth, a laughing bag, and a more-pathetic-than-scary old man rubber mask called ‘Uncle One-Tooth’. Sam is impatient and patronising, Jonathan the sensitive ‘crybaby’, but neither can shift a single unit despite their much-rehearsed sales patter (“we want to help people have fun” intones Jonathan, perhaps channelling the director’s own frustration with the existential comedian’s dilemma  – condemned to make people laugh when tears seem more appropriate). But they need each other: we all fail, Andersson suggests, but at least it’s more bearable if we have someone else to fail with.