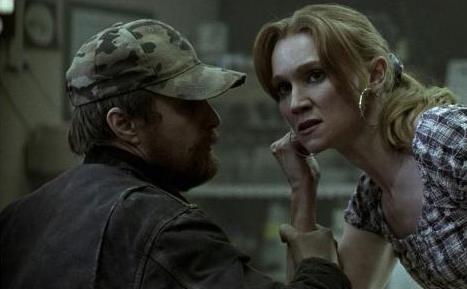 Firmly in the tradition of Deliverance, Winter’s Bone and all those other freaks-in-the-forest backwoods thrillers, David Rosenthal’s follow-up to Janie Jones is in the end too shot through with genre cliché to prevail as the gritty thriller that it is striving to be. But it’s a close call, and this tastily-shot indie number has a few things going for it, not least Sam Rockwell’s powerful lead performance as a none-too-bright hick caught up in a mess of his own making after he shoots a young girl in a hunting accident.

As in the best Coen Brothers tradition, one dim man’s dim decision unleashes a whole lot of trouble.

Scripted by Matthew F. Jones from his own novel, A Single Shot does tension and atmosphere well but is less adept at managing story and character. Rockwell’s intense turn keeps the contrived plot at bay for a while, but even Sam can’t prevent the buffet of tattooed psychos, bad-ass waitresses, boozy ex-cons and washed-up lawyers that is served up here from ruining our appetite. Surely, even in deepest darkest Hicksville, there must be one normal person?

Still without a sales agent at the time of writing, A Single Shot is a long-hatched project that finally emerged in the Berlinale Forum sidebar – perhaps surprisingly, as it is classic Sundance material. Given the sense of deja-vu it inspires, the film will not be a shoe-in for theatrical action even in territories that are normally receptive to US indie fare.

The film opens promisingly, cutting to the chase with the action that will kickstart the story’s chain of consequence and retribution. Out on a solitary hunting expedition, Rockwell’s character John Moon takes a shot at what he thinks is a deer. It turns out to be a young woman – and she’s dead. Panicked and distraught, the hardscrabble hick hides the body in a dumpster by the girl’s forest hideout – where he also finds a chest full of dollars. Keen to win back his estranged waitress wife Jess (Kelly Reilly) and their young son, and perhaps buy back the family farm that was sold off years before, John decides to keep the money.

As in the best Coen Brothers tradition, one dim man’s dim decision unleashes a whole lot of trouble. The trouble will involve, variously, Obadiah a.k.a. ‘The Hen’ (Joe Anderson) a drawling rural psycho; John’s drunken wreck of a best friend, Simon (Jeffrey Wright, acting his heart out); cookie-cutter bad guy Waylon (Jason Isaacs); and a scuzzy, crippled small-town lawyer with bad taste in toupees and clothes played by – guess who? – William H Macy. John soon realises that money alone will not win his freckled spouse back, but another love interest – Abbie (Ophelia Lovibond), the daughter of the man who bought his family farm – is sent in to plug the gap. All is overlaid by the “swarm of strings” tension music of Icelandic composer Atli Orvarsson, which although effective is pitched too high in the mix at times for us to hear ourselves think.

In the source book, placing the action in a generic, never-named backwoods setting may have helped to unleash ancestral terrors, but here the trick is less convincing: the characters all speak with an all-purpose Ozark full of country colour (“he got a hard bark on him”) that comes on like the joke ‘Redneck’ option offered by certain online translation programmes. We yearn, in the end, for Winter’s Bone’s strongly rooted sense of place. And although Eduard Grau’s moody, dark, shallow-focus photography is one of the film’s real pleasures, it’s just a smokescreen in the end for the story’s banjo-noir stereotypes. Still, the ending – which will challenge the squeamish - is genuinely harrowing; and for genre completists, A Single Shot is one to add to the collection.

Screenplay: Matthew F. Jones, based on his novel