A Street In Palermo 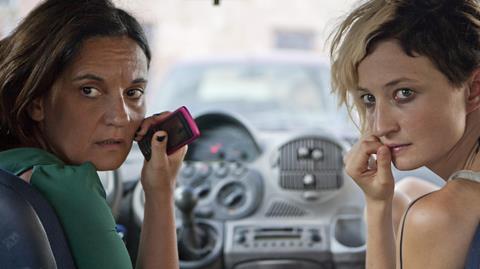 Don’t mess with Sicilian women. That’s perhaps a reductive summary of the flawed but still tasty cinematic debut of Italian theatre director Emma Dante, which revolves entirely around a stand-off between two cars in a narrow lane in the jerry-built outskirts of Palermo, neither of which is prepared to give way.  But there’s no denying that one of the pleasures of A Street In Palermo (Via Castellana Bandiera) is the way it turns a supporting cast of swaggering Palermo males into impotent spectators of an all-female duel, which comes across as something a matriarchal Sergio Leone might have made if he had started channelling the spirit of Pirandello.

The handheld camera nails the visceral quality of this godforsaken periphery where donkeys and Vespas coexist, where badly-paved rubbish-strewn streets end in sudden cliffs, and several houses have the same street number, because everybody chooses the number they like best.

It’s a film of two halves that doesn’t quite know where to take the brilliance of the set-up in its meandering second stretch, but for dramatic force and originality A Street in Palermo still ranks among the more interesting Italian films of 2013 so far. International sales will be limited by that second-half dip and the unclassifiable nature of a film that mixes realism and allegory, broad satire, black comedy and social critique, but it could carve out an arthouse niche in more adventurous territories.

Admirably sparing with explanations, the story takes a while to add up at first. We see a white-haired widow, Samira (Cotta), feeding dogs and tending a grave in a down-at-heel cemetery. Two women, Rosa (Dante) and Clara (Rohrwacher) bicker in a car as they drive through Palermo backstreets; we soon realise they are lovers on the verge of a break-up, or perhaps a breakdown (especially in the case of tense, bitter Rosa, who lives has left the island and hates being here).

A proletarian family return from a fractious day at the beach, driven by Samira, who turns out to be the resented mother-in law of sweaty, crass, bolshy family patriarch (Malfatti). Finally, in Via Castellana Bandiera, the run-down street that gives the film its Italian title, the two cars we’ve been following grind to a halt facing each other, with neither driver prepared to reverse a few metres to resolve the issue. It’s hot, and in this part of town one-way streets are subjective concepts.

This is the beginning of a stand-off that begins in the realm of the possible, with the drivers of other backed-up cars taking sides and neighbours chipping in with advice and gossip, but soon drifts into more dreamlike, allegorical territory. Clearly, for both mute grandmother-from-hell Samira and stressed-out queen bitch Rosa the challenge is about more than just moving a car – and what eventually comes to the fore is the grudging solidarity-through-hatred of these two women, who literally will not be moved by the men who posture, cajole and even open a betting book in the neighbourhood on which one is going to move first. Both have their confidantes, Samira her grandson (Casarolo) and Rosa her punkette girlfriend Clara, who is prepared to give the relationship another chance but who is, from the outset, on the outside looking in.

The handheld camera nails the visceral quality of this godforsaken periphery where donkeys and Vespas coexist, where badly-paved rubbish-strewn streets end in sudden cliffs, and several houses have the same street number, because everybody chooses the number they like best. In Italy, the expression ‘Far West’ is used to mean a place or situation where no rules apply other than muscle and self-interest, and A Street In Palermo depicts a Sicilian Far West which is also a Far West of the soul: a place forsaken by god and man, where obstinacy is the only virtue left.

The occasional nod at Spaghetti Western and even horror conventions in sound design and visuals (like the Manichean ‘Rosa black witch vs Samira white witch’ contrast) drive the point home. Sure, you have to set the mannerism-tolerance meter a little higher than usual, but if you do there’s a lot to enjoy in this quirky Sicilian powder-keg drama.