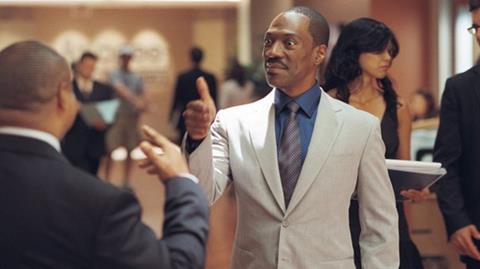 Little wonder that A Thousand Words has been on the shelf for nearly four years. With its lame comedy and sappy drama this high-concept Eddie Murphy vehicle is weak even by the low standards of the star’s recent output. After what promises to be a brief theatrical run the Paramount-distributed DreamWorks production will have to make the best of its prospects in the home entertainment marketplace.

Brian Robbins can’t make much of the comedy that springs from this flimsy premise, a premise that seems to rob motor-mouth Murphy of one of his funniest assets.

A wide-ish US theatrical release this weekend was presumably intended to capitalise on Murphy’s planned turn as Oscar host. Without that marketing platform, the film probably won’t do much better than Murphy’s most recent solo comedies Imagine That and Meet Dave, both of which took less than $20m domestically. International potential is negligible.

Murphy’s Jack McCall is a brash Los Angeles literary agent with a fragile marriage and daddy issues who boasts of his ability to “talk anybody into anything.” Jack’s push to sign a New Age guru leads, pretty inexplicably, to the appearance in his garden of a tree that sheds leaves every time Jack speaks. When all the leaves are gone the tree dies and Jack dies.

Brian Robbins, who previously directed Murphy in Meet Dave and Norbit, can’t make much of the comedy that springs from this flimsy premise, a premise that seems to rob motor-mouth Murphy of one of his funniest assets. Jack mugs his way through charades-style scenes with his wife, his assistant and his Starbucks’ server and feels the tree’s pain in supposedly humourous ways (the tree gets sprayed with pesticide, Jack acts stoned at a business meeting).

The physical comedy seems to be aimed at Murphy’s Daddy Day Care kiddie audience but there are some more adult gags for the grown ups. The film’s last half hour delivers a vague moral about appreciating what you’ve got.

Murphy is consistently over the top but Clark Duke, from Hot Tub Time Machine, delivers a few funny moments as Jack’s insecure assistant.