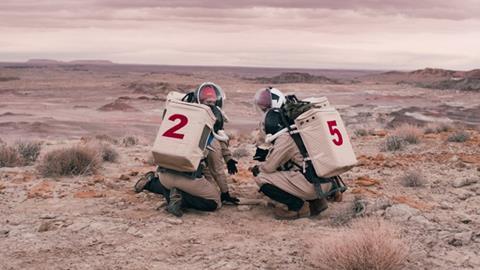 An intriguing and absorbing delve into almost alien parts of the United States, Swiss director Nicolas Steiner’s documentary feels at times as if it is looking at post-apocalyptic worlds when it truth it is simply observing a strange and at times little seen under-belly of the land of opportunity.

The film is beautifully shot by cinematographer Markus Nestroy, and while perhaps rather languid at times there is a certain poetry to these unusual lives.

He makes no attempt to make a profound message, but instead gets up close and personal to a series of people who live in the margins and have an alternate – and at times endearing  - view of the world and how they want to live. The film had its world premiere at the Rotterdam International Film Festival.

He follows the likes of April, a former soldier, who wanders the rocky slopes of Utah in a space suit as part of research for a mission to Mars; homeless couple Rick and Cindy who live in the storm drains of Las Vegas, and David, who lives in desert near to remote Slab City in California and who sends messages to God by placing bottles onto the ground.

They may sound like disparate characters but they are united in a shared vision of stoical independence, and there is an odd honour to them as presented by Steiner’s compassionate camera. The film is beautifully shot by cinematographer Markus Nestroy, and while perhaps rather languid at times there is a certain poetry to these unusual lives.