Pathé’s $6m Africa United is an ambitious UK-South Africa-Rwanda co-production which filmed across three countries. Sarah Cooper reports from Lake Tanganyika in Burundi, where it was the first international project to shoot. 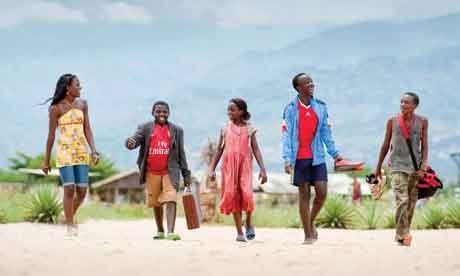 “There is a mirror between the story of how this production has come together and the story of the film. We dared to dream that it might be possible, just like the kids in Africa United dared to dream,” says producer Mark Blaney between takes at the idyllic Bora Bora beach bar on the banks of Lake Tanganyika in Burundi.

Africa United tells the story of three Rwandan children — Dudu, his sister Beatrice and his friend Fabrice — who embark on an epic journey across seven African countries to attend the opening ceremony of the football World Cup in Johannesburg, South Africa. Along the way they encounter everything from hippos to heists, find new friends and face up to issues such as Aids and child prostitution.

The project originated with Rwandan film-maker Eric Kabera, whose credits include the 2001 drama 100 Days about the worst atrocities of the 1994 Rwandan genocide. Kabera wanted a project which showed Rwanda in a different light and wrote an initial script about a boy who makes a journey from Rwanda to the World Cup.

While Kabera was in Los Angeles pitching the script in November 2008, his Rwandan colleague Ayuub Kasasas Mago sent it to Mark Blaney and Jackie Sheppard of UK-based production company Footprint Films, whom he had met that year at the Rwandan Film Festival, which Kabera set up in 2005.

“It took us all of five seconds to say, ‘This looks special,’ but we were sitting in the UK thinking there was no way Eric would come to us. Luckily, he did,” says Blaney, who set up Footprint Films in 1994 with fellow film-school graduate and Slumdog Millionaire screenwriter, Simon Beaufoy.

With the understanding that Footprint would take Kabera’s story premise but enlist their own screenwriter, Beaufoy could have been an obvious contender for the job. But the producers already had a screenwriter in mind: Welsh novelist and BBC drama writer Rhidian Brook, who had spent a year following the Salvation Army on an Aids mission to Africa, India and China.

“I felt like I could write with a degree of authority on the issues, without patronising or wallowing in them,” explains Brook, who had already been talking to Footprint Films about a number of other projects when Africa United came along.

The producers had also been working with UK-based director Gardner-Paterson — whose mother and grandfather were born in Rwanda — on a feature version of her short, We Are All Rwandans. When Africa United came along they were convinced she was the person to direct it. “In our minds, it was always going to be Debs because of her heritage,” says Blaney.

Backed by privately financed development money, Brook and Gardner-Paterson embarked on an African road trip in March 2009 to work on the story and scout for locations, including the Bora Bora beach bar. “We were standing by the pool saying wouldn’t it be amazing to come back and shoot this… and here we are,” says the first-time director at the end of a long day’s shooting. She admits that one of the attractions of making the film was taking “an unusual story and trying to make it human. That’s what fires me up.”

It took Brook just six weeks to write the script, at which point, in July 2009, the team sent it off to Pathé’s managing director Cameron McCracken to whom Brook had already pitched the idea earlier in the year. “With no known director or writer or cast attached, I sort of put it to the bottom of my pile thinking, ‘I’ll get to it at some point,’” says McCracken, who had backed Footprint Films’ 1999 drama The Darkest Light. “But then I happened to read the opening pages, where the character of Dudu gives a speech straight to camera and I was hooked. He’s just one of the most brilliantly realised comedic characters.”

Pathé put up 50% of the film’s $6m (£4m) budget, which included cash-flowing the UK tax credit. BBC Films and the UK Film Council also put in $768,000 (£500,000) each. The project was able to qualify for the South African tax credit, as an official UK-South Africa co-production between Footprint Films and South African service company Out Of Africa, which provided most of the film’s crew.

The film is also the first formal co-production between the UK and Rwanda, via a clause in the UK-South African treaty which allows a “third party” — in this case, Eric Kabera’s Link Media — to come on board. The film received $768,000 (£500,000) from Rwanda’s Ministry of Youth, Culture and Sports, which is in the process of setting up an official Rwandan film commission to encourage international productions to shoot in the country.

Authenticity on a budget

In the screenplay, the children begin their epic journey in Rwanda, travelling through Burundi, Congo, Tanzania, Zambia and Zimbabwe before arriving in South Africa. In reality, the crew was limited to three countries by the co-production treaty and budget restrictions.

“We could have made it really straightforward and shot the whole film in South Africa where they have the infrastructure in place. But we wanted to make it as authentic as possible within our restrictions,” says Sheppard.

Shooting began in South Africa in early February where the team spent five weeks at various locations, including Q Studios in Johannesburg, before relocating to Rwanda and Burundi for another two weeks. The producers are also looking into the logistics of shooting scenes at the World Cup opening ceremony on June 11.

Crossing the Rwanda/Burundi border was one of many logistical challenges, especially as the team had to import all the lighting  and camera equipment from Kenya. “The Rwandans love red tape and the trucks got stuck at customs for three days,” explains the film’s line producer, Mark Hubbard.

Still, production co-ordinator Sarah-Jane Wheale, who worked on the 2004 film Shooting Dogs in Rwanda, was able to enlist around 20 crew members from Rwanda and Burundi in key positions.

With the performances of the five children key to the film, the team scoured the schools and drama groups of Rwanda, Uganda, Kenya and the UK, before holding a final casting workshop in Rwanda’s capital, Kigali, in December 2009. Two of the five children are UK-based, although they were both born in Rwanda at the time of the genocide, and 15-year-old Eria Ndayambaje, who plays the team leader Dudu, is part of a travelling theatre group in Uganda.

Slumdog comparisons are inevitable, given the subject matter and Pathé’s involvement in both, but Brook says a more obvious template for the film would be Rob Reiner’s 1986 coming-of-age drama, Stand By Me.

Currently in post at UK company Molinare, the plan is to bring a teaser to the market at Cannes, with an October release to follow, three months after the World Cup. “It may be the impetus to the adventure, but this is not a film about football,” says McCracken. “It’s about people living their dreams.”