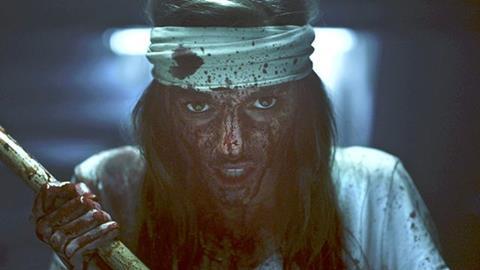 This intelligent and nicely claustrophobic spin on the killer virus/zombie film is an impressively sustained number that belies its modest budget and hints at social networking as much as body-munching as being the source of a killer outbreak that hampers New Year’s Eve fun for five university friends.

Antisocial is impressively designed and staged and the film keeps on developing its structure and concept rather than relying on simple zombie routines.

Antisocial, which had its world premiere at Montreal’s Fantasia Film Festival, is rich on atmosphere and punctuated by a series of convincing performances. Lack of star quota will naturally hamper international sales, but it has the credentials to be a cult breakout as well as a must at other genre festivals.

Canadian writer/producer/director Cody Calahan and co-writer/co-producer Chad Archibald - who made other Fantasia hits as Neverlost (2010) and Monster Brawl (2011) – have come up with a film that feels both original and familiar. The set-up that social networking is dangerous has been tapped before, but it also allows technology to be a catalyst as much as blood and guts, and while the film’s second half does descend into familiar ‘young folk in peril in a house’ territory, the chills are well sustained and the tension builds well.

Five University friends – Sam (an impressive Michelle Mylett), Mat (Cody Thompson), Jed (Adam Christie), Steve (Romaine White) and Kaitlin (Ana Alic) – meet at the house early to have a few drinks and chat before all of their other friends are due to arrive. Sam has recently broken up with her boyfriend and deleted her social network account on ‘thesocialredroom.com’ but the others are keen to upload photos and keep everyone updated on their fun.

Bur out on the streets it seems an infection has caught hold and as they watch the news they realise that there is mayhem and panic out there, with drooling bloodthirsty types trying to break their way into the house.

As usual in such circumstances, the bodies gradually start to fall, and thorough a videolink to a young teen named Tara (Laurel Brandes), who was one of the first to encounter the virus, they could to realise the symptoms of the killer disease. Most impressively those left alive realise that the only way to try and save themselves is to undergo a little amateur surgery to remove the deadly tumour in the brain…an impressively staged sequence that sees the blood running.

The chilling housebound horror is a familiar format, but Antisocial is impressively designed and staged and the film keeps on developing its structure and concept rather than relying on simple zombie routines. Michelle Mylett emerges as a nicely determined and feisty axe-wielding heroine, and gives the film its dry cynicism and sense of dogged determination.