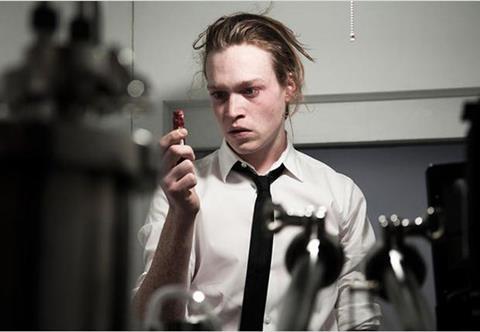 Set in a future world where the viral infections contracted by celebrities are copy-protected and sold to adoring fans, Brandon Cronenberg’s feature debut is a cybermedical sci-fi vampire thriller that battles constantly, and with only limited success, against its own ludicrous script. And although it would be nice not to have to present the director as ‘the son of David’, Cronenberg fils makes little attempt here to take his distance from dad, several of whose stylistic tics are reproduced, from in-your-face bodily fluids and blurrings of the border between man and machine to some rather gelid, mannered dialogue.

But for all the ludicrousness of its plot and style-over-substance mannerisms, this dark fable could well carve out a place for itself in late-night genre slots. With more needles on view than a porcupine – most of them sinking into flesh in extreme close-up – this is not one for the faint-hearted, but hardcore cyber-horror fanboys should lap it up. It’s going to be a tough one for the censors to call: can you classify mainlining of diseases as the promotion of drug use?

The film imagines a future world – not very far into the future, it seems – in which celebrity culture has spiraled to the point where certain biomed firms have contracts with stars that allow them to take samples of the viruses they fall prey to, and copy-protect them before selling them on to fans who are keen to enjoy the same cold, the same cold sores, the same stomach bugs that invaded their idols’ bodies. Syd March (Landry Jones) works for one of these, Lucas Clinics: when we first meet him, he’s clearly not well (he spends much of the time with a thermometer in his mouth) and the reason is soon revealed: he’s getting around the clinic’s tough security by injecting celebrity viruses into his own body and taking them home to his spartan apartment.

Here he just happens to have one of the large, expensive and complex Lucas Clinic machines that process the blood samples – presumably he smuggled it out of the lab in his pocket when nobody was looking.

Syd sells his smuggled samples to a sort of biomed-butcher, Arvid (a nicely counter-cast Pingue), who sells cuts of meat grown from celebrity cells. But Syd is not the only pirate prepared to risk his health to get the viruses out there, and he’s also threatened by the competition of a rival lab (it’s not a stretch to see an ironic nod here at the aggressive client-courting methods of certain Hollywood talent agencies).

When he’s sent by his boss to gather a blood sample from Lucas’ star client, Hannah Geist (Gadon), who has been seriously ill, Syd sees a unique opportunity to jump the gun by injecting her blood into his body immediately. But this particular virus turns out, predictably, to be a little unpredictable.

The script spends a lot of time getting the little details right (and there are some nice ones, like the celebrity organs that Syd’s boss collects, mounted in glass phials like saintly relics) but forgets to fill in some huge gaps in the bigger picture. A world in which a few saddos want to contract celebrity viruses is not unthinkable, but the film loses credibility by suggesting that a stupidity virus has infected the entire world.

It also makes no attempt to make the virus-collecting fans remotely believable – they all seem to be sent from central casting. And a device whereby each virus is given its own face (distorted with pain, like a portrait by Francis Bacon) still fails to explain why a flourishing market in copies would not spring up as soon as a few people were ‘injected’ with the original viruses.

There’s visual imagination here, but it’s not always entirely original: as well as the oeuvre of Cronenberg pere, Antiviral’s future world draws on films like Blade Runner, A.I., and even (for the future as a shabbier version of the present) Eternal Sunshine of the Spotless Mind. But Cronenberg junior does exercise impressive control over the film’s airless cyberhorror atmosphere. His means include a pale colour palette in which blood stands out in stark relief, a moody, metal-edged electronica soundtrack and, most of all, Syd’s increasingly ravaged body (the latter thanks also to an impressive performance from Landry Jones). But there’s a certain lack of subtlety in the exercise nevertheless – for example, in the way the script hammers home, at the end, the film’s vampiric subtext. We knew, Brandon, we knew.