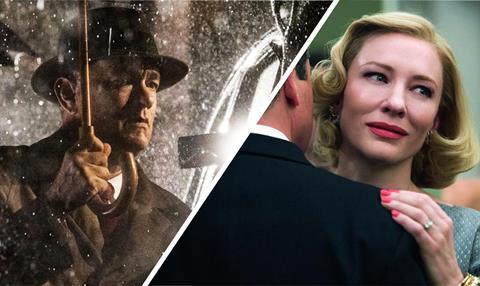 Steven Spielberg’s Bridge of Spies and Todd Haynes’ Carol lead the nominations for the EE British Academy Film Awards, which were announced in London this morning.

Both received nominations in nine categories including Best Film alongside The Big Short, The Revenant and Spotlight.

It marks a further boon for Todd Haynes’ Carol, a period love story starring Cate Blanchett and Rooney Mara, which is leading the nominations for this weekend’s Golden Globes and is now a favourite for the Oscars.

Speaking to ScreenDaily from Los Angeles, Carol producer Stephen Woolley said he was “thrilled and ecstatic” by the nominations but admitted he had been concerned it might have been forgotten as it premiered at the Cannes Film Festival last May.

“This afternoon we [co-producer Elizabeth Karlsen] were thinking Bafta voters might have forgotten about us, with the big rush of movies at the end of the year, full of male testosterone,” said Woolley.

“But Todd [Haynes] has made something that, like Cate Blanchett’s character, is a beautiful, elegant movie and people communicate with its passion.”

Other notable actors to miss out included Charlotte Rampling and Tom Courtenay, who were each expected to each receive a nod for their performances in 45 Years, and Tom Hardy, who starred in multi-nominated The Revenant and Mad Max: Fury Road as well as Kray Twins drama Legend (which received no nominations).

Also missing were James Bond film Spectre, period drama Suffragette, Shakespeare adaptation Macbeth and US drama Joy, which at least was expected to get a nod for lead actress Jennifer Lawrence (although it is understood screeners for the David O Russell drama were sent out late). [Click here for more snubs]

British actor Eddie Redmayne won best actor last year for his portrayal of Stephen Hawking in The Theory Of Everything and will hope to repeat that success for his performance as a transgender artist in The Danish Girl.

But he will face stiff competition from Leonardo DiCaprio and Matt Damon for their performances in survival tales The Revenant and The Martian respectively, as well as Michael Fassbender and Bryan Cranston in their titular roles in Steve Jobs and Trumbo.

In the supporting actor category, Idris Elba secured the sole nomination for African child soldier drama Beasts of No Nation and will be up against Benicio Del Toro (Sicario), Christian Bale (The Big Short), Mark Ruffalo (Spotlight) and Mark Rylance (Bridge of Spies).

Despite being overlooked for the main prizes, action Mad Max: Fury Road secured seven nominations in the technical categories including a nod for cinematographer John Seale and editor Margaret Sixel.

Blockbuster Star Wars: The Force Awakens was also recognised in four of the craft categories including a nomination for veteran composer John Williams for best original music.

The winners will be announced at an awards ceremony on Feb 14 at London’s Royal Opera House, hosted by Stephen Fry. It will be broadcast on BBC1 in the UK and in all major territories around the world.