Directors, producers and actors came and went but Phyllis Nagy remained the one constant. The writer of Patricia Highsmith adaptation Carol talks to Nikki Baughan 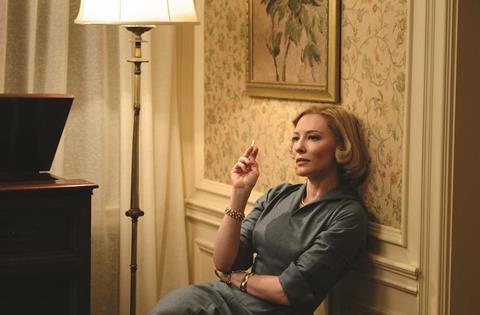 While Patricia Highsmith’s 1950 debut novel Strangers On A Train marked her out as a masterful writer of suspense — a reputation solidified by Alfred Hitchcock’s film adaptation in 1951 — her second book was something altogether different. A love story between married socialite Carol and the younger store clerk Therese, which plays out in the morally claustrophobic environment of 1950s New York, The Price Of Salt (renamed Carol when republished four decades later) was so controversial Highsmith’s publisher, Harper & Brothers, rejected it, only to be released by Coward-McCann under the pseudonym Claire Morgan in 1952.

Since then, however, it has gone on to be one of the celebrated gems of LGBT fiction and, given the popularity of other Highsmith adaptations such as The Talented Mr Ripley, the big screen beckoned. Yet almost two decades have passed since playwright Phyllis Nagy was invited by Film4 in 1997 to write a screenplay, with numerous directors from Stephen Frears to John Crowley having been attached during what has proved to be a tumultuous production experience.

But Nagy weathered the storm thanks to an unwavering belief in the story and the voice of its author. That she was a friend of Highsmith, on whose own experiences the book is based, also made this a deeply personal project, even if that ultimately proved to be a double-edged sword.

“I knew [Patricia] did not care for many of the screen adaptations of her work over the years, so initially [our friendship] was not a help,” Nagy reveals.

“I read the novel at least six or seven times, in quick succession, and made notes. Then my notes were put away and I never referred to them again, so as not to be overawed or reverent to the source material. I went away and did anything else but writing, then came back and wrote it straight through without stopping. As I left the book behind, and got [Patricia’s] ghost off my shoulder, it was much easier. I knew the character of Therese was all Pat, and I could hear her voice. And so it became a comfort, rather than a curse.”

In the years since that first draft, the screenplay evolved as different directors and producers came and went.

“What I learnt is that if there is a director or producer of interest who has opinions, you have to try and accommodate those,” says Nagy. “The best way to handle things that are clearly not good ideas is to embrace them and do them very well, and to hope the person who suggested them sees that and thinks, ‘Oh God, I was wrong’.”

There were some areas where Nagy was not prepared to compromise, including its 1950s setting — “I don’t think it would have any metaphorical or emotional impact were it set today” — and the tone of the lesbian romance at the heart of the story. “I was adamant about retaining [the book’s] instinctual psychology about sexuality,” she says.

“These women are so free about their attraction, and what it means. There are lots of other attendant issues that provoke guilt or anxiety, but it doesn’t have anything to do with that feeling. That could so easily have been lost along the way. When Todd [Haynes] came on board, he was the perfect collaborator in terms of giving me licence to take it back to my set of original instincts. He had a great interest in a classic, subjective point-of-view love story, and we were sympatico about many of the same things in terms of tone and the need for restraint.”

Nagy embarked on a collaborative rewrite process with Haynes, although she notes there were “things I did for Todd that did not make it into the film. Those are good to have in the script because, if the structure is right, you can take out anything you like and it will still work.

“It’s a different thing from something being superfluous,” she suggests. “It’s about recognising in the structure of the script what impact editing and post-production can have, and making sure the film can survive cuts for running time, or scenes that weren’t good on the day, whatever it might be, rather than worrying about the script surviving the film. Ultimately, having been through this experience with Todd, it¹s about getting the right voice at the directing helm.”