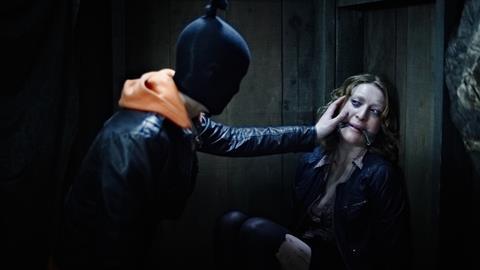 The law of unintended consequences is convincingly stretched to the limit in Bad Seeds (Comme un homme), a tense, carefully controlled tale of lethal fallout from bad decisions.  Contemporary drama adapted by director Safy Nebbou and Gilles Taurand from a 1970s-set novel byBoileau-Narcejac - the French duo whose writings inspired Clouzot’s Les Diaboliques and Hitchcock’s Vertigo -  puts a timeless, yet 21st century spin, on grief, guilt, revenge and a shot at redemption.

Widescreen photography is striking, chilly, borderline supernatural as called for, whether depicting wind turbines on the open plain or theswampy muck surrounding the isolated cabin.

Because information is doled out in an unnerving, not exactly linear manner, viewers have to concentrate to piece together actions and relationships that could also be filed under “Horror.” The storytelling is oblique but is headed toward resolution.

Louis (Emile Berling), a 16-year-old honor student, is best friends with older, less gifted classmate Greg (Kevin Azais), a rough-edged troublemaker he admires beyond reason.  Drafting Louis to help him get even for an unseen humiliation in class, Greg ‘borrows’ a car from a repair garage to kidnap his English teacher (Sarah Stern) and teach HER a lesson.

In a wordless and bravado opening sequence, the two friends transport the teacher to a remote cabin in a downpour by night. Stumbling hooded through the woods, ferrying their bound and gagged victim in a rowboat, they leave her, helpless, for what is meant to be a lone night of doubt and terror.

Louis’s contribution is the family cabin, a bare bones structure that’s sinister in the dark and hardly cheerful by day. When the 24-hour prank is extended, Louis ends up with a larger role than he could ever have anticipated.

Twenty-five minutes in, Louis spots something at the side of the road that triggers raw memories the context of which only gradually becomes clear to the viewer.

It would be unfair to reveal more, but Louis and his father are struggling to communicate with each other in the wake of one family tragedy while Louis grapples  with how to handle the dicey implications of knowing that a missing woman is sequestered in the woods. There’s a loaded gun, which will almost certainly be fired.

Widescreen photography is striking, chilly, borderline supernatural as called for, whether depicting wind turbines on the open plain or theswampy muck surrounding the isolated cabin. Nebbou’s best layering of doubt and determination remains 2008’s Mark Of An Angel but this is a close second.

Screenplay: Safy Nebbou, based on the book L’âge bête by Boileau-Narcejac