A captivating performance in The Giants by Zacharie Chasseriaud. 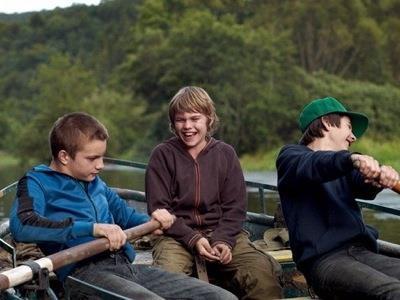 Rising star alert — there is a kid named Zacharie Chasseriaud who plays one of three leads in Bouli Lanners’ Directors Fortnight double prize winner The Giants (that’s him in the middle of the boat in the pic). He’s completely captivating on screen in the film, playing a cheeky younger brother learning some hard life lessons.

Young zak also loved the spotlight at the screening, kicking off the singalong for Bouli’s birthday and also loudly encouraging some back-and-forth shouts with the cast and crew up on the balcony. And I saw him running around on the beach at the Fortnight closing party, waaaay after bedtime, seemingly having the time of his life.

And it has to be asked — has anyone in cannes tried out his character’s naughty hot sauce trick?