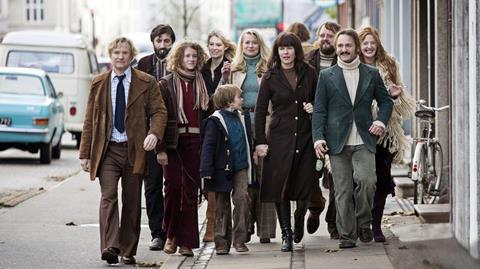 Berlin International Film Festival (Feb 11-21) has added nine titles to its Competition line-up, bringing the current total to 14 (the full Competition programme will be announced soon, according to the fest).

The new additions include The Commune, marking the first time Danish director Thomas Vinterberg (The Hunt, Far From The Madding Crowd) has been in Competition at Berlin since Submarino in 2010. The film centres on a Danish commune in the 1970s and will be released in Denmark this weekend (Jan 14).

French director Mia Hansen-Løve (Eden) has been selected with her drama Things to Come, starring Isabelle Huppert as a woman embarking on a new life after her husband leaves her for another woman. The film will world premiere at Berlin.

Another world premiere will be documentary Fire at Sea, capturing life on the Italian island of Lampedusa, a frontline in the European migrant crisis, from Sacro GRA director Gianfranco Rosi. ScreenDaily revealed today that Doc & Film International has acquired international rights to the feature.

Bosnian director Danis Tanović will return to Berlin with the world premeire of Death In Sarajevo (aka Looking For Europe), a film based on the play by French philosopher and writer Bernard-Henri Levy, which explores the existential fears, anxieties and moral dilemmas that plague modern European society.

Tanović previously won Berlin’s Silver Bear with An Episode In The Life Of An Iron Picker in 2013 and the Oscar for Best Foreign-Language Film with war drama No Man’s Land in 2002.

Lav Diaz, the Filipino director behind four-hour feature Norte, the End Of History and six-hour Locarno-winner From What Is Before, will world premiere A Lullaby to the Sorrowful Mystery at Berlin. The film centres on the search for the body of 19th century Filipino revolutionary leader Andres Bonifacio.

French director André Téchiné will return to the Berlinale with the world premiere of his latest feature, Being 17. The film, co-written by director Céline Sciamma (Girlhood), is a gritty coming-of-age tale about a pampered teenager – the son of a soldier on a military mission in Africa – who is temporarily forced to share his home with the adopted son of a neighbour. A mutual sense of hatred exists between the two and tensions start to rise.

Téchiné, who has been nominated for Cannes’ Palme d’Or six times, was previously in Competition at Berlin with the Catherine Deneuve, Gérard Depardieu romantic drama Changing Times in 2004 and AIDS drama The Witnesses in 2007.

Other titles include the world premiere of United States of Love, from Tomasz Wasilewski, the Polish director of Floating Skyscrapers, which is set in the aftermath of the fall of communism, following four women of different ages who desperately want to change their small-town lives.

The new additions are rounded out by A Dragon Arrives!, from Iranian filmmaker Mani Haghighi who won the Netpac award at Berlin in 2012 with Modest Reception; and Letters from War, from Portuguese director Ivo M. Ferreira (Na Escama do Dragão).

The following films are to have their world or international premiere during the Berlinale 2016, and will compete for the Golden Bear and Silver Bears.