Films include Shepherds and Butchers with Steve Coogan; Don’t Call Me Son from Anna Muylaert; and a documentary about a director and actress who were kidnapped by Kim Jong-il. 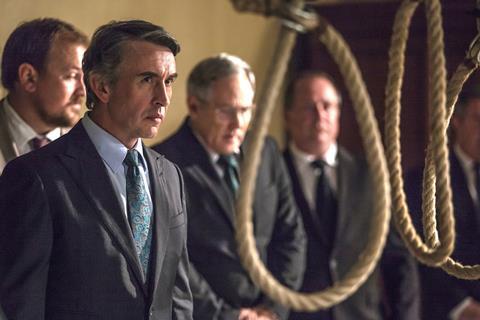 The Berlinale (Feb 11-21) has completed the selection for this year’s Panorama strand, comprising 51 films from 33 countries. A total of 34 fiction features comprise the main programme and Panorama Special while a further 17 titles will screen in Panorama Dokumente.

A total of 33 films are world premieres, nine are international premieres and nine European premieres. The 30th Teddy Award is also being celebrated with an anniversary series of 17 films.

Notable titles include Shepherds and Butchers from South Africa, which is set toward the end of Apartheid and stars Steve Coogan as a hotshot lawyer who faces his biggest test when he agrees to defend a white prison guard who has killed seven black men. What ensues is a charge against the death penalty itself, in a case that changes history. Andrea Riseborough co-stars.

Two other films also revolve around the death penalty: Panorama’s opening film on Feb 11 is the Czech directorial debut I, Olga Hepnarova (Já, Olga Hepnarová) by Tomas Weinreb and Petr Kazda. The film shows how a young woman in the former Czechoslovakia commits a devastating act, for which she faces the death penalty, which was still in effect there until 1989.

The other title is Brazilian documentary Curumim, about an inmate on death row in Indonesia.

Europe, She Loves, a Swiss-German co-production, opens documentary strand Panorama Dokumente. It examines the states of mind of heterosexual couples from Seville, Tallinn and Dublin to Thessaloniki.

A burning issue is introduced into the programme by Rachid Bouchareb’s La route d’Istanbul (Road to Istanbul): a Belgian mother sets out to find and bring home her daughter who has joined the jihad in Syria. Bouchareb has already presented six of his works in Berlin (five fiction features and one short film). He last participated in the 2014 Competition with Two Men in Town.

Following Hayatboyu (Lifelong, Panorama 2013), director Aslı Özge will show her first German-language film, Auf Einmal (All of a Sudden), in which one wrong decision jeopardises a young man’s entire existence.

The Danish-Swedish co-production Shelley, the feature debut of Ali Abbasi, uses genre-specific means to interweave one of this year’s Panorama themes - the desire to have children - with the situation of eastern Europeans migrating for jobs.

In the Brazilian film Mãe só há uma (Don’t Call Me Son), it’s a matter of blood ties versus conditioning and the discovery of a baby’s earlier abduction: director Anna Muylaert won the Panorama Audience Award in 2015 for A que horas ela volta (The Second Mother). In Antes o tempo não acabava (Time Was Endless), a young man has to deal with the cultural clash between his tribe’s Amazonian Indian rituals and the self-determined urban life which he finds so alluring. Brazilian human rights activist Yvonne Bezerra de Mello was the protagonist of Kriegerin des Lichts (Warrior of Light) 15 years ago. In Zona Norte, filmmaker Monika Treut visits de Mello again to see what has come of her alternative educational methods for working with street kids.

Two films from Chile complete this year’s selection from Latin America: Alejandro Fernández Almendras observes in Aquí no ha pasado nada (Much Ado About Nothing) the consequences of class society and corruption on a group of privileged teenagers. And in Alex Anwandter’s first feature, Nunca vas a estar solo (You’ll Never Be Alone), a father seeks help in vain when his gay son becomes the victim of a hate crime in their neighbourhood.

E J-yong, a frequent guest of the Berlinale, depicts in Jug-yeo-ju-neun Yeo-ja (The Bacchus Lady) the story of a gentle heroine: she has devoted her life and now, in old age, her death to men - yet within the workings of patriarchy, she had more say and freedom than her clients’ wives were ever given. The Lovers and the Despot about the dream couple of South Korea’s movie scene who were kidnapped one after the other to North Korea, provides engrossing documentary insights into the lives of Koreans, as does WEEKENDS, which reveals the swift progress and growing pitfalls of the gay emancipation movement.

Shanghai: the dramatic story of a stolen baby in San Fu Tian (Dog Days) takes a modern and intimate look at a new China and its middle class – that vigorously growing segment of society which in the documentary Wu Tu (My Land) squabbles over every square meter owned by vegetable farmers and thus makes gentrification palpable. The baby theme comes up again in Inside the Chinese Closet: marriages of convenience and other societal constructions are invented to satisfy conservative family structures, whether those concerned want them or not.

The situation is similar for the young Israeli in Who’s Gonna Love Me Now?. He flees to London but then HIV makes his relationship with his family even more complicated – a topic hardly pursued in recent years but which is now the focus of several productions in the Panorama 2016: for instance, Strike a Pose about the dancers of Madonna’s legendary Blond Ambition Tour; Brüder der Nacht (Brothers of the Night) and Kiki; as well as some previously announced films: The GDR Complex, Uncle Howard, Mapplethorpe: Look at the Pictures, and the fiction feature Théo et Hugo dans le même bateau.

The Panorama Audience Award – for which more than 32,000 votes were cast in 2015 – will be presented for the 18th time together with radioeins to the best fiction and the best documentary features on the last day of the festival (Berlinale Publikumstag), Feb. 21, 2016 at 5.00 pm in CinemaxX 7. The winning films will be screened afterwards.

Conceived to promote German cinematic art, the Heiner Carow Prize will be awarded for the fourth time to a documentary, fiction or essay film from the Panorama section in cooperation with the DEFA Foundation. After the ceremony, which will be held at 5.00 pm on Feb 18, Heiner Carow’s Die Russen kommen (The Russians Are Coming, GDR 1968) will screen at Kino International.

Inside the Chinese Closet - Netherlands
By Sophia Luvarà
International premiere

S one strane (On the Other Side) - Croatia / Serbia, by Zrinko Ogresta - World premiere

The Ones Below – United Kingdom, by David Farr – European premiere - Debut film

While the Women Are Sleeping – Japan, by Wayne Wang – World premiere