Busan International Film Festival has been under government pressure since 2014. 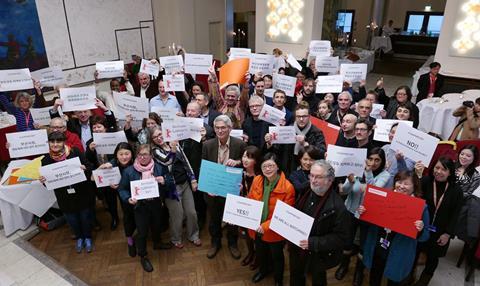 The campaign is raising international support for the beleaguered Busan International Film Festival (BIFF), which has been under intense government pressure since it screened controversial documentary The Truth Shall Not Sink With Sewol in 2014.

In addition to the international show of support, South Korea’s other film festivals, including Jeonju, BiFan, and Seoul International Women’s Film Festival, attended the Berlin event and issued a joint statement:

“We are seriously concerned about Busan city government’s censorship and their attempt to expel Mr Lee by filing a criminal lawsuit against him, as it is nothing but a political retaliation from central and city government just because BIFF defended their artistic freedom and its role for public good.”

Leading Korean filmmakers also came out in support of BIFF at the general assembly of the Directors Guild of Korea on February 3. Bong Joon Ho said: “Every film needs to be screened freely in every film festival. Unconstrained programming is the basis of all film festivals and BIFF has carried this out for 20 years. I hope our society encourages BIFF to move on free of intervention and pressure.”

Park Chan-wook added: “Compromise against our will leads BIFF to collapse in the end for sure. So whatever it takes, we should help director Lee Yong-kwan serve consecutive terms to keep BIFF and freedom of expression in our culture and art.”