Ahead of its Berlinale screening this weekend, drone warfare documentary National Bird is becoming one of the festival’s buzz documentaries. 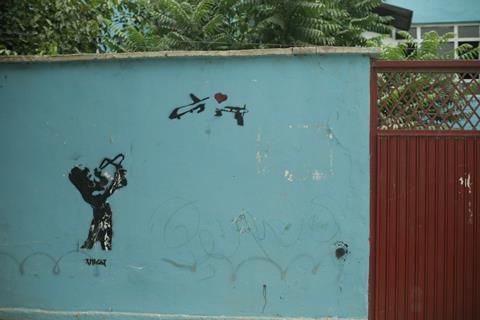 The film follows the journey of three whistleblowers determined to break the silence around US drone strikes.

Despite being executive produced by Errol Morris and Wim Wenders, documentary filmmaker Sonia Kennebeck’s (Sex: Made In Germany) second feature has flown under the radar; intentionally so.

“All funders were aware of the sensitive nature of this film and didn’t publicize it for the three years of production,“ explains Kennebeck about the US feature.

“The US administration has this cloud of secrecy around the drone program,“ says the director. “I wanted to understand more about the drone war from first-hand sources and I hope that my film will start a discussion about the question of whether drone warfare is ever jusitifed. They do not disclose how and why they target people, they do not publish the number of people killed.“

“I avoided narration on purpose,” adds the US-based German filmmaker. “I want to give the audience room to form their own opinion. “There is too much commentary on this issue.“

Research was painstaking. “I found a 2,000-page declassified report by the US military on one of their airstrikes on civilians in Afghanistan,” said Kennebeck.

“The report was ordered by Gen. Stanley McChrystal, and it concluded, through extensive transcripts and interviews, that a Predator drone crew was largely responsible for the attack.

“I found the survivors of the airstrike and was the first person to interview them and get their first-person accounts,” she continues. “Their stories give a much larger dimension to the incident and reveal that parts of the military investigation had been sugarcoated.

Access to official documents was inevitably difficult.  “Government authorities make it very difficult to access classified information by threatening current and former government employees with prosecution under the Espionage Act, which can be equated to treason. It’s a very intimidating threat that has a chilling effect on freedom speech and freedom of the press. People are afraid to speak about it.

“In terms of official access to classified information: I have done my own Freedom of Information Act requests, but so far they have been rejected. I am appealing.”

Kennebeck’s subject and approach convinced Wenders and Morris to join. “I saw the potential of the film when Sonia first told me the story,” says Wenders, himself known for documentaries Buena Vista Social Club and The Salt Of The Earth. The Oscar-nominated director looked at cuts, gave input, made phone calls and wrote letters on behalf of the film.

“I think Sonia’s approach was excellent: find out from people who were very closely involved, what it means to operate these flying computers,” he says.

“What it is to be so closely connected to warfare, to death, to killing, and yet be so removed. Nothing beats the firsthand experience, especially in documentaries.”

Is drone warfare ever justified, according to Wenders? “Drones might have a huge civilian future, for instance to bring supplies or medicine to areas where there is no other access, in large parts of Africa for instance. In warfare? I would hate to even think of trying to justify this terror from above.

“Of course you can say that there is always “the good cause” that needs the “extra power”. But then you cannot complain if the “bad cause” uses that same power, eventually. And hasn’t that always been the case, in history?”

At a time of heightened virtual reality, the seasoned filmmaker is cognizant of the increasing public appetite for compelling exposes.

“I think documentaries are the counter-culture to fantasy films,” says Wenders. “And as fantasy is the mainstream darling these days, it’s only obvious that people are looking for the real thing. And also: it seems to me that in documentaries there are not so many formulas as in fiction films. A good documentary has to invent its own form, or better: its subject has to dictate the film’s form. That is not the case in fiction at all. Here there are formulas, rules and recipes galore.”