The Moet British Independent Film Awards celebrate the diverse output of the UK film industry, and provide a significant platform for films and film-makers. 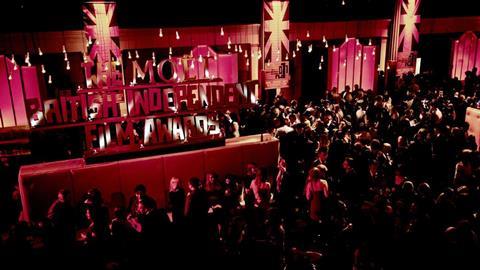 From growing up on the estates of Bradford to police corruption in Edinburgh via the streets of Paris and Manila, the nominees for this year’s Moet British Independent Film Awards (BIFAs) are as eclectic as ever, highlighting the sheer range of independent films and talent coming out of the UK.

Set up by Elliot Grove 16 years ago to champion this vibrant sector, the BIFAs have become one of the most noteworthy events on the British film calendar, in part because of the breadth of work they celebrate — and the surprises that can therefore occur come awards night. In 2010, for example, Gareth Edwards won best director for Monsters over Tom Hooper for The King’s Speech, while last year Toby Jones picked up the best actor prize for Berberian Sound Studio over the likes of Tim Roth and Terence Stamp.

The BIFAs can give independent films a meaningful platform, both within the industry and for audiences. Berberian Sound Studio producer Mary Burke of Warp Films says that the film’s four BIFA wins “really helped us in terms of visibility in the industry, and a lot of people were talking about it”.

Burke also produced Paul Wright’s For Those In Peril, which is nominated this year, as well as Bunny And The Bull, which beat Terry Gilliam’s The Imaginarium Of Dr Parnassus to the Achievement in Production prize in 2009. “It seems that the jury selects the best films of the year, so you get a sense that it’s about audiences rather than who is friends with who,” she continues. “It’s pretty exciting. It’s like a challenge.”

This year’s ceremony takes place on December 8 at Old Billingsgate in London, with BIFA patron James Nesbitt back to host. Nominations were announced on November 11 by Ewan McGregor.

Director Penny Woolcock is the chair of this year’s jury, which votes on the winners after the BIFA pre-selection committee decides on nominations from a longlist. The jury also includes former Screen Star of Tomorrow MyAnna Buring, Bart Layton (who won best debut director last year for The Imposter, which was also winner of the best documentary award) and actor Art Malik.

Artificial Eye leads the distributor pack with 14 nominations and Jon Rushton, head of publicity for Artificial Eye parent company Curzon, says BIFA recognition adds to the “must-see” factor of its films. “For The Selfish Giant, it adds further kudos on top of the excellent reviews the film received on release,” he says. “As was the case with Fish Tank, awards attention can also lead to an overperformance on DVD and further revenue streams.”

Steel Mill Pictures’ Ken Marshall, the lead producer of Filth, says that the BIFA recognition is “icing on the cake”.

“The BIFA nominations are another endorsement of the quality and commerciality of the film. That will inevitably filter down not only to the general public, but to the global film industry as well.”

Notable omissions from the nominees include box-office hits Alan Partridge: Alpha Papa and Sunshine On Leith, both of which were eligible under BIFA guidelines that state films must have been either released by November 30 this year, or have been shown at a British film festival. Films must qualify as British, but the talent need not be.

BIFA co-directors Tessa Collinson and Johanna von Fischer acknowledge that response has generally been positive to this year’s nominations, but that BIFA is never “going to get it 100% right for everybody,” von Fischer says.

“Sadly when films are polarising, it can mean it won’t get through because where one person would definitely vote, another definitely wouldn’t,” she explains. “That’s why we say to our pre-selection committee to not vote for a film unless they believe it deserves a nomination. At least then there’s a feeling of passion in everything that gets there.”

Collinson has nothing but praise for BIFA’s pre-selection committee of 70 experts, who watched more than 200 films for this year’s nominations. “They’re so on it and demanding to watch films and are responding to them. The support… has been great.”

A big change for the 2013 awards is the introduction of a new signature trophy designed by Fredrikson Stallard and created by Swarovski. “It’s something the industry and our members have been pushing for and we’ve finally got it,” explains Collinson. “It’s a huge commitment from Swarovski and to us, so that is pretty special.”

This year, there was also a longer period — three weeks — between longlisting and the nominations. “Every year we sit down with our advisory committee and we try to tighten things a bit,” says von Fischer. “There are a few things we looked at and thought we could tweak, and we’ll continue to do so.”

The BIFA ceremony comes before the first round of Bafta voting, so do the co-directors believe BIFA wins could add films to the Bafta agenda? “People are definitely looking at BIFA,” Collinson says. “It’s very clearly defined with Bafta. We’ve grown into an area and it has grown into a more international area, and the two complement each other.”

Von Fischer concurs: “If Bafta wasn’t doing what it’s doing, we couldn’t do what we do.”

From a distributor’s viewpoint, Curzon’s Rushton feels the BIFAs have developed into an “increasingly important part” of the UK industry. “BIFA has made its awards fun, credible and valuable to the film industry. They can also highlight excellence that can be missed by the generally older and more conservative Bafta voters, such as with Berberian Sound Studio. In fairness to Bafta, it has countered that this year by having an extra nomination for the Outstanding British Film based on a jury vote.”

Yet it is not just the films like Berberian Sound Studio that feel the benefits of BIFA recognition. It boosts the production companies behind them too. “As producers, it means a lot to us that we have a place to celebrate the hard work we’ve done, and be recognised by our peers,” notes Warp Films’ Burke. “We’re trying to build a legacy, and getting that recognition year after year from BIFA is something that cements that legacy within the industry.”

It is a sentiment echoed by Steel Mill Pictures’ Marshall. “It sends out the message that we develop and produce films that are ambitious and of a high standard. In turn, it should give more confidence to potential commercial partners. In an increasingly competitive landscape, BIFA recognition can only be beneficial.”

Along with showcasing the best of UK independent film, BIFA’s co-directors point to the night bringing together newcomers and established names as a defining strength of BIFA. “There’s no segregation at BIFA,” Collinson says. “There’s no VIP area. If you’ve made a good film or delivered a good performance, you have a right to be there whether you’re known or not.”

Von Fischer adds: “It represents what we both enjoy. The new guys walking up the red carpet with the people that they’ve admired and been inspired by.”