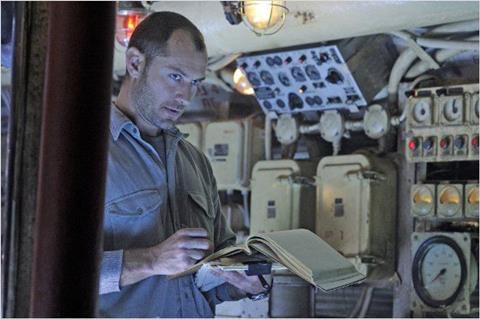 An appropriately tense and claustrophobic submarine thriller, Kevin Macdonald’s Black Sea has an almost Cold War sensibility to it as it pitches a crew split evenly between Russians and Westerners against each other as things get dangerously sticky deep below the waves. Though a contemporary story, it plays out like an old-fashioned dramatic-thriller, and while lacking standout action sequences it sustains itself thanks to atmosphere and performances rather than special effects and grandstanding sequences.

What gives the film its impressive dramatic heft is the striking production design and cinematography that do much to sustain the visceral atmosphere.

Jude Law, impressively sporting an Aberdeen accent, is the glue that holds the film together, and it is testament to his skills as a – how shall we put it – more mature actor, that his intelligence and intensity shines through, and that even in the grim, sweaty and dank confines his innate charisma holds its own. A contrast to the plethora of festive family fare due on screens, the film opens in the UK and Ireland on December 6 prior to an international roll-out, with a US opening set for late January 2015.

The submarine movie genre tends to always tick a few familiar plot boxes, and while Black Sea is no real exception, at its gritty heart it is more a class-war story of ordinary working men taking revenge on money-grabbing bosses by taking extraordinary risks. And just like The Wages Of Fear (and its remake Sorcerer) – which the filmmakers reference – it relishes the visceral and brutal realities of underwater working stiffs making a dangerous buck.

Experienced former Navy submarine captain Robinson (Law) is laid-off by a salvage company after 11 years service, and after hearing the story of a German U-boat packed with World War II-era Russian gold siting on the seabed in the Georgian depths of the Black Sea – unable to be reached officially due to the political situation in the region – he agrees to head a misfit crew to go and get the gold.

With a crew made up half by Russians and half by Scots (though also including volatile Aussie diver Fraser, played by Ben Mendelsohn), they board a ramshackle but just-about seaworthy vintage Russian diesel submarine and head off into the Black Sea, evading detection from the Russian navy above and trying to locate the lost U-boat, which lies precariously balanced on deep on the sea-floor.

Issues about language and mis-communication (the Russian crew are the only ones who can read the controls or really understand the craft) permeate, and as the claustrophobic tension mounts so does the underlying bitterness between the two groups of men. A violent flashpoint threatens to cause a major rift, but the lure of the gold is still there and when they finally find the Nazi craft there is a glimmer of hard-worked success for the men.

But as the rifts between the men grow more tense and violent a series of incidents – and an uncertainty about the mission itself - combine to threaten the delicate stability of the relationships and as danger threatens the sub things rely on an uneasy truce in the hope of ever making it back to the surface alive.

The tension and terror of being trapped in a bleak, sweaty, confined space deep beneath the waves is impressively sustained with the mounting hysteria and paranoia the driving force for the story. The plot is straightforward to a large degree, though one major plot device (involving the violent xenophobic tendencies of diver Fraser) that acts as the catalyst for the drama to come doesn’t really work and niggles rather. His actions never really add up – it is if some scenes are missing – and it does hamper the ability to take the impressively staged action to come appropriately seriously.

Jude Law is nicely steadfast and stoical as the one man trying to keep the bickering and increasingly brutal crew together. Grigory Dobrygin (seen recently in A Most Wanted Man) grows into his role as the taciturn Morosov while Michael Smiley offers welcome warmth and humour as the wisecracking Reynolds. By its very nature, this is not a film blessed with many roles for women, with Jodie Whitaker cropping up only in flashback scenes as Robinson thinks back to the wife and son that he lost due to his commitment to the being a submariner.

What gives the film its impressive dramatic heft is the striking production design and cinematography that do much to sustain the visceral atmosphere. There was clearly a modest special effects budget – there are a few underwater model/effects shots that could have come from any sub film – but the submarine interior footage is tough, tense and genuinely gripping.