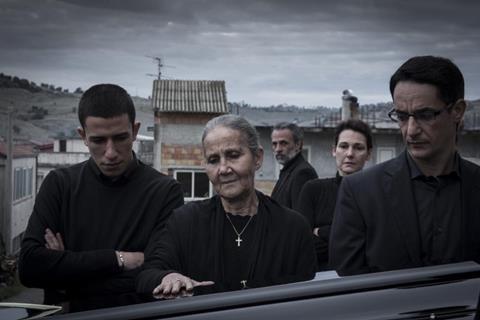 Though far from prolific, Francesco Munzi has made a name for himself in Italy as a director to watch in Italy since the release of his debut, Saimir (2004). This tough, dark Calabrian Mafia tale, which opened in Venice before heading to Toronto, confirms his promise, and has to be the first of his three features to stand a good chance of notching up some serious international sales, thanks also to some fine performances by an under-the-radar cast and the director’s sure control of tone and pace.

Settings and situations contrast the archaic Calabria of shepherds, crumbling hilltop villages and roofless churches with the jerry-built villas and abandoned schools of the region’s fractured modernity.

Comparisons to Gomorra and Romanzo Criminale will undoubtedly be made, but that’s mostly because those are the only two recent organised crime films that travelled much outside of Italy; in actual fact, though it has its share of action, Black Souls (Anime Nere) belongs more to an introspective strand of Italian Mafia genre represented, for example, by Claudio Cupellini’s undeservedly overlooked 2010 thriller Una Vita Tranquilla.

We assume we’re in Romanzo Criminale territory when we see a major drug deal go down in a Dutch port city, and follow the Italian brokers as they drive back to their powerbase of Milan – with street-smart Luigi (Leonardi) persuading his more business-oriented brother Rocco (Mazzotta) to stop off at a farm on the way so they can steal a couple of goats, which a faithful lieutenant proceeds to butcher. It’s a nod at the primal violence and raw appetite that lurks behind the modern-Mafia veneer, but if we expect the adrenalin of deals, blood feuds and drug wars to keep on pumping we’re soon forced to rethink. For Black Souls gradually reveals itself not as a hardboiled genre film about a violent power struggle, but a measured, ethically resonant story of what violence and power do to families in places like Africo, one of the strongholds of the Calabrian ‘ndrangheta, which long ago overtook the Sicilian Mafia as Italy’s richest and most ruthless organised crime network.

Central to the story are the pair’s older third brother Luciano (a nuanced Ferracane) and his proud, impulsive only son Leo (a strong performance by 20-year-old Calabrian newcomer Giuseppe Fumo). Luciano has bowed out of the family ‘business’ in order to dedicate himself to farming, also offering his services as vet to goatherds in the rugged Aspromonte foothills. Leo, however, sees his dad as a loser who debases the family honour by not reacting to the slights of more powerful rival clan boss Bareca. When Leo recklessly shoots up the façade of a Bareca-affiliated bar whose owner has insulted him, and heads off to Milan to stay with his uncles, a mechanism is set in motion that is shown to be as inexorable as a Greek tragedy, until a final twist sends the catharsis onto a surprising new track.

Unlike auteur compatriots Matteo Garrone or Paolo Sorrentino, Munzi doesn’t foreground his style, preferring to let the story come forward via a minimal though efficient use of the tools at his disposal – which include high-contrast natural light photography in the first part, a gradual darkening of colours and atmospheres in the second, and Giuliano Taviani’s tense neo-Vivaldi string soundtrack. Settings and situations contrast the archaic Calabria of shepherds, crumbling hilltop villages and roofless churches with the jerry-built villas and abandoned schools of the region’s fractured modernity. In this unfinished region, abandoned by a state that sends its police to search the houses of the victims, not the suspects, half-finished houses and broken roads are a simulacrum of the clan members’ restless, suspicious, interrupted lives.