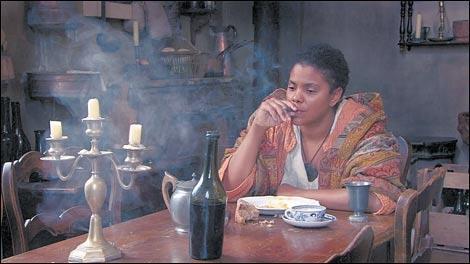 Afar cry from the tremendously successful L’esquive and Secret of the Grain, both of them personal contemporary statements focusing on the Maghreb community in France, Abdellatif Kechiche’s latest is far more ambitious and possibly quite out of his reach.  Going back two centuries for a real-life story condensing the oppressive humiliation inflicted on Black Africans in Europe, he delivers a highly emotional but uni-dimensional historical pageant, conceived in the right spirit but unnecessarily and insistently repetitive.

Kechiche’s film never leaves the audience any space to breathe or think.

Since it deals with the last five years in the life of Saartje Baartman, the Hottentot Venus, a familiar figure to anyone interested in racial discrimination, there will most probably be a market to acquire this MK2 production and festivals to programme it, though in all truth the subject is worth being examined in a far more judicious manner.

Saartje Baartman (Yahima Torres), a 25 year-old black woman, was brought in 1810 first to London and then to Paris, by her Afrikaan master Caezar (Andre Jacobs), who displayed her ample proportions in freak shows in which she was supposed to be an untamed beast that only Caezar could control.

Taken to court by the African Society in London for treating her like an animal, Caezar was exonerated and the case dismissed when Saartje testified that she had accompanied him of her own free will, that she is his business partner and that their performance together was all an act.

Persuaded by a French adventurer and bear tamer, Reaux (Olivier Gourmet) that there is much more money to be made out of Saartje in Paris, Caezar relocates to the French capital, where he allows Reaux to take over and turn the act - with a few degrading improvements - into an attraction for debauched high society salons, treating Saartje as if she was one of his bears.

An illustrious French scientist, Georges Cuvier (Francois Marthouret) finds out about Saartje’s unusual physical features and is willing to pay a high sum to examine her in detail, in particular her genitals. Once she refuses to cooperate, Caezar sells his interest in her to Reaux, and when she doesn’t quite comply with his demands, he puts her to work in a cathouse, where she contract a venereal disease and dies in 1815.

Like a descent in hell, Kechiche’s script follows Saartje from the relative illusion of being an artist, in London, to being an animal on display in Paris. She is robbed of her last vestige of dignity when she becomes an object for scientific research while still alive and certainly after her death when she is disemboweled by a scientist intent on proving that she belongs to an inferior race, related to orangutans rather than men.

Every person she comes in contact with exploits her, from Caezar, who pretends she is his partner as long as she obeys his orders, through Reaux, for whom she is just another beast of work; Cuvier, who sees in her body, alive or dead, a splendid subject for his next paper and even down to her so-called friend, Jeanne (Elina Lowensohn), who cheats on her while turning tricks together in the bordello.

Had it been published as a book – and there is still room for a fully documented book on Saartje’s life – this could have been a fascinating treatment, more so since Saartje represents the fate of many Africans coming to Europe out of their own initiative, to face the same kind of fate. But Kechiche’s film never leaves the audience any space to breathe or think.

Not only is it, unlike his previous work, very conventionally and uninterestingly shot, but all the characters are flat, overdrawn and exaggerated and the insistence to repeat scenes time and again (for instance the London shows) does not make the experience more painful for the audience, just more exhausting. The sets and costumes are perfectly serviceable, though Kechiche says he had to do with a fraction of the original budget, but the London freak shows and the Paris salons look like old-fashioned clichés, inhabited by extras with a very limited repertoire of grimaces.

Yahima Torres certainly has the physical attributes for the part, but her lack of acting experience limits her performance to a sad, heart-breaking expression that rarely changes. Andre Jacobs is a rough, not very convincing Caezar and Olivier Gourmet will probably prefer to forget his monstrously overblown portrait of the villainous Reaux.