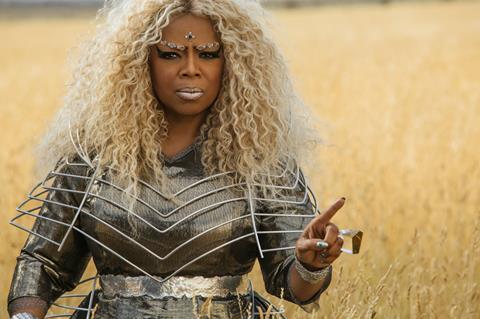 MARCH 12 UPDATE: Marvel Studios’ Black Panther used a confirmed $40.8m weekend session to leap to $561.7m and seventh in the all-time North American pantheon, as Disney’s A Wrinkle In Time disappointed, and A Fantastic Woman and The Shape Of Water capitalised on Oscar successes.

DuVernay becomes the first black woman to direct a film budgeted at more than $100m. Studio executives expected the film to perform where it did.

Entertainment Studios released the Rob Cohen action thriller The Hurricane Heist starring Toby Kebbell and Maggie Grace in ninth place on a lowly $3m from 2,402 sites. Even at a reported $35m budget not including marketing spend, this is a disappointing result.

Returning to Black Panther, the blockbuster overtook Rogue One: A Star Wars Story and The Dark Knight but still has a way to go before it can overtake Star Wars: The Last Jedi in sixth place on $619.5m. However, with the Easter holidays coming up it stands a good chance of doing so.

As things stand the tentpole ranks as the second highest Marvel Cinematic Universe release and could become the highest if it overtakes Marvel’s The Avengers in fifth place on $623.4m. The film crossed $1bn worldwide at the weekend and stands at $1.078bn.

SPC’s best foreign language Oscar winner A Fantastic Woman from Participant Media, Fabula and Komplizen Film was the most obvious beneficiary of Academy Award success, climbing 16 places after expanding by 77 to 166 to deliver $272,000 for an early $1.2m after six weekends.

Focus Features opened Sundance 2017 thriller Thoroughbreds in 15th place on $1.2m from 549 sites, while IFC debuted Armando Iannucci’s dark comedy The Death Of Stalin at number 28 on $184,805 from four sites for a terrific $46,201 per-site average. SPC opened comedy drama The Leisure Seeker starring Helen Mirren and Donald Sutherland at number 34 on $111,703 from 28.