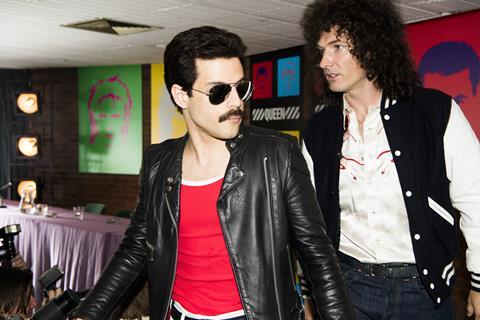 NOVEMBER 5 UPDATE: Fox’s Bohemian Rhapsody soared to the top of the global box office at the weekend thanks to an estimated $124m haul that included $74m from 64 international markets.

UPDATED: The Queen / Freddie Mercury drama starring Rami Malek (Mr. Robot) stands at $91m internationally and ranks top in approximately 50 markets. Bohemian Rhapsody debuted top in France on $8.1m debut. It grossed a stunning $7.5m following an impressive 13% drop in the second weekend in the UK to hold on to top spot and climb to $26.7m.

In other mighty number one debuts, the Fox tentpole produced by Graham King and directed by Bryan Singer debuted top in Mexico on $5.7m, Germany on $5.6m for the fifth highest debut so far in 2018, Australia on $5.5m for the seventh highest, and Spain on $5.2m.

UPDATE: Keira Knightley fantasy The Nutcracker And The Four Realms arrived day-and-date with the number two North American launch on $39.2m from 45 active territories. The Chinese audience was the chief driver on $11.9m that ranked number one in an otherwise quiet session in the Asian titan, followed by Italy on $5.7m for top spot in what was the fifth highest debut of the year-to-date.

Johnny English Strikes Again added $5.7m from 59 from for $118.3m, and $121.5m worldwide. The Rowan Atkinson comedy opened in Brazil on $300,000, and added $1.3m for $21m in lead market the UK after five weekends. Damien Chazelle’s Neil Armstrong drama First Man with Ryan Gosling grossed $4.7m from 50 active territories and climbed to $45m internationally, and $87.1m worldwide. It opened in fourth place in Italy on $1.9m, and stands at $5.3m in France after three weekends, and $10m in the UK after four.

Amblin Partner’s fantasy The House With A Clock In Its Walls has reached $24.7m and $125.4m worldwide, while Tiffany Haddish and Kevin Hart comedy Night School stands at $20.3m and $94.7m. BlacKkKlansman is on $39m internationally, and $87.2m worldwide.

After five weekends in France, $1.6m boosted the tally to $11.3m, while Italy and Brazil have delivered $7.1m and $5.3m after four weekends, respectively. The UK remains the lead market on $29.9m, followed by Australia on $14m. The final key market to open will be Japan on December 21.

The animation Smallfoot added $12.8m from 77 to reach $116.5m. A $2.7m third weekend in France pushed the tally there to $10m, while $2.1m in the second weekend in Russia resulted in $7.1m, and $1.3m in the third in China boosted the running total to $9.9m. After four sessions in the UK, which remains the top market, the animated feature voice by Channing Tatum, Zendaya, and James Corden, among others, stands at $13.2m. Germany has delivered $3.6m after four.

Tiffany Haddish and Tika Sumpter comedy-drama Nobody’s Fool kicked off its international launch day-and-date with North America, earning $265,000 from three territories. South Africa delivered a number one start on $122,000. The film arrives in the UK on November 23.