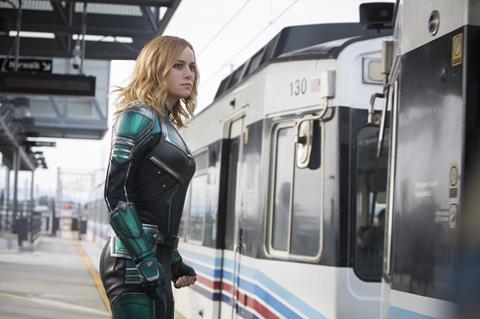 Jordan Peele’s SXSW hit Us will pose a challenge this week, although even if its slides down the order, Captain Marvel will hit $300m by next weekend.

Paramount’s family animation Wonder Park opened in second place on $15.9m in 3,838 theatres, while the romance Five Feet Apart arrived in third via Lionsgate on $13.2m in 2,803.

Pantelion’s No Manches Frida 2 made a splash, as the adaptation of German comedy hit Fack Ju Göhte opened at number six on $3.8m in 47 sites. The R-rated comedy stars Omar Chaparro, Martha Higareda, Aaron Díaz, and Itatí Cantoral, among others, and was directed by Nacho G. Velilla from a screenplay by David S. Olivas, Claudio Herrera and Sergio Adrian Sánchez. The original No Manches Frida opened during Labor Day holiday weekend in September 2016 and grossed $3.6m. Participant Media’s sci-fi thriller Captive State opened in seventh place through Focus Features on $3.1m in 2,548 sites.

In the limited arena, Focus Features opened the drama The Mustang starring Matthias Schoenaerts, Connie Britton, and Bruce Dern at number 44 on $71,657 from four venues for a respectable $17,914 average. Fox Searchlight debuted Keira Knightley post-Second World War drama The Aftermath at number 50 on $56,419 in five venues. Sports comedy Dominirriquenos 2 opened via Spanglish Movies at number 17 on $558,754 in 53 venues.

This week’s wide release is Jordan Peele’s Get Out follow-up Us, which premiered in SXSW earlier in the month.