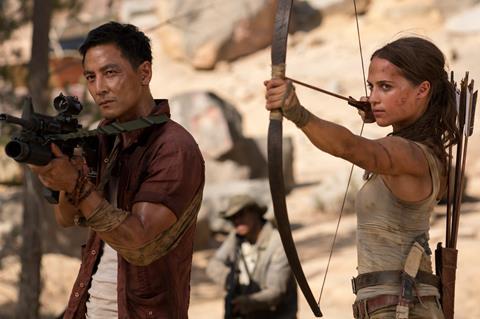 MARCH 17 UPDATE: International audiences are responding well to Alicia Vikander in the role of adventurer Lara Croft as Tomb Raider plundered an estimated $62m from 65 markets by Saturday.

China accounts for an estimated $28.5m of that, comprising $12.1m from opening day Friday and a projected $16.4m for Saturday. Friday devoured 50% of top five market share and delivered Warner Bros’ fourth highest opening day in the territory as executives said the tally reached $28.9m.

Elsewhere the action film co-production between Warner Bros and MGM, which the companies are jointly distributing internationally, has generated $502,000 from its first day in Mexico, $500,000 in Scandinavia, and $320,000 in Spain.

MARCH 16 REPORT: Marvel Studios’ Black Panther has a fight on its hands to hold on to the international box office title in the face of a spirited challenge from Tomb Raider, which according to early estimates has raced to $12.3m on Friday opening day in China.

The films are posed for a mighty clash. In one corner is Marvel Studios’ behemoth Black Panther, which has overtaken Transformers: Dark Of The Moon ($1.124bn), The Lord Of The Rings: Return Of The King ($1.120bn) and Skyfall ($1.109bn) this week en route to becoming the 16th highest global release in history on $1.126bn and counting.

China leads the way on $83.7m and the tentpole will surge past $100m this weekend for a terrific running total that while not spectacular in and of itself, represents a laudable accomplishment given how films with black leads have struggled to gain a foothold in the territory until now.

Black Panther stands at $548.1m internationally and grossed roughly $100m from the marketplace last weekend, giving it an edge in the duel with Tomb Raider as it charges towards $600m this weekend.

However the latter has grossed approximately $37m including that China estimate, which if it holds means Tomb Raider ranks number one on 50% share of the top five box office for Warner Bros’ fifth biggest China opening day.

Disney also gives a push to the fantasy adaptation A Wrinkle In Time from Ava DuVernay, the first black woman to direct a $100m film who has just been confirmed as director on the DC Extended Universe title New Gods for Warner Bros.

A Wrinkle In Time has grossed an early $7.4m and arrives in France, Thailand, Indonesia and Philippines this weekend. The industry will be watching its progress closely: Black Panther was expected to do well, even if it has delighted with its outsized success. A Wrinkle In Time clearly does not have the same prospects, yet a strong performance will only bolster the argument amplified by Black Panther that audiences want more diverse cast and stories. Pixar’s Oscar winner Coco has generated $540.7m and debuts in Japan.

Fox International’s The Shape Of Water and Three Billboards Outside Ebbing, Missouri both stand at $91.1m heading into the weekend. The former debuts in China two weeks after winning four Oscars including best picture and best director for Guillermo del Toro. A strong opening there could push the fantasy romance past $100m this weekend.

Sony Pictures Releasing International’s Peter Rabbit has reached $27.4m and opens in the UK and Mexico.