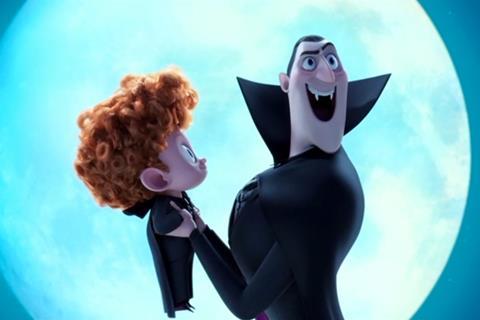 Hotel Transylvania arrived exactly three years ago on $42.5m and finished on $148.3m.

The sequel finished number one comfortably ahead of Warner Bros’ comedy The Intern in second place on $17.7m. Robert De Niro and Anne Hathaway star.

The other title is Black Mass, which has grossed $42.1m after two weekends through Warner Bros and ranks fifth.

Everest stands on $23.3m in fifth place through Universal after two sessions and grossed $3.7m on 366 Imax screens to reach $11.5m and become the first Imax September release to cross $10m.

In its second session Lionsgate expanded Sicario by 53 to 59 theatres in its second weekend and the drugs cartel thriller broke into the top 10 to stand at $2.3m.

Lost In Hong Kong, the Chinese comedy smash that stormed to a $100m opening in China at the weekend, arrived in North America via Well Go USA on $537,736 from 28 venues.