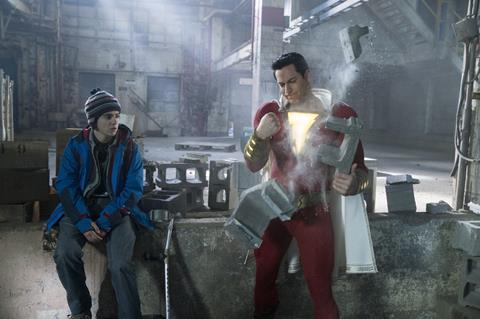 APRIL 9 UPDATE: New Line and DC Entertainment’s Shazam! delivered another strong result for the DC stable as it dominated box office in North America on a confirmed $53.5m, while Paramount’s horror Pet Sematary arrived in second place on $24.5m.

The superhero adaptation about a boy who turns into a superhero when he shouts Shazam! marks another strong result for the DC Entertainment stable after blockbusters Aquaman and Wonder Woman. It reportedly cost $100m and is off to a solid start factoring in a $102m international debut that puts the worldwide tally at $158.8m.

Stephen King adaptation Pet Sematary starring Jason Clarke, John Lithgow and Amy Seimetz debuted well at number two in 3,585 venues. At a reported cost of $21m, the result is a decent one, allied to the $17.3m international launch. This was the second best opening weekend for a King adaptation behind Warner Bros’ behemoth It.

Civil Rights era drama Best Of Enemies opened in sixth place through STX in 1,705 sites on $4.4m. Taraji P. Henson and Sam Rockwell star in the true-life story of the unlikely friendship between a rights activist and Klan leader

In its fourth session the Pantelion Films comedy No Manches Frida 2 fell three slots to number 15, adding $404,657 for $8.7m. Mike Leigh’s historical drama Peterloo opened via Amazon Studios at number 43 on a so-so $26,002 from three theatres for a $8,667 average.