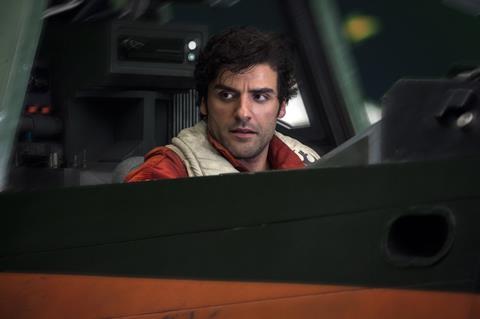 DECEMBER 26 UPDATE: Lucasfilm’s Star Wars: The Last Jedi held off the debuts of Jumanji: Welcome To The Jungle, Pitch Perfect 3 and The Greatest Showman over the four-day holiday weekend.

The four-day period saw The Last Jedi gross $99m for $395.6m as it dropped 55% against last weekend’s second highest opening weekend of all time, which looks a lot better than the tentpole’s alarming 67.5% drop over three days.

By Tuesday the film ranked as the third highest of the year-to-date in North America and was poised to pass Warner Bros’ Wonder Woman on $412.6m. It stands a chance of finishing 2017 as the top film if it overtakes Disney’s Beauty And The Beast on $504m.

Three new releases burst into the top five led by Sony’s reboot Jumanji: Welcome To The Jungle on $55.4m in 3,765 theatres over four days and $72m over six since the December 20 debut. This compares well to $11.1m from the 1995 original starring the late Robin Williams, which in real terms opened on $17.84m.

Pitch Perfect 3, the third and final entry in Universal’s singing troupe series, debuted at number three on $26.4m in 3,447. Anna Kendrick and Rebel Wilson return to the fray, although the debut represented 39% of the $69.2m May 2015 opening of Pitch Perfect 2, which finished on $184.3m in North America.

Another major awards contender, Fox Searchlight’s The Shape Of Water, climbed two places to number 10 in its fourth session and delivered $4.4m for $8.9m.

Turning to other awards season heavyweights, A24’s Lady Bird fell six places to rank 16th on $28.7m after eight sessions; The Disaster Artist fell nine to 17 through A24 on $16m after four; and SPC’s Call Me By Your Name on $3.3m after dropping three slots to number 20.

Three Billboards Outside Ebbing, Missouri dropped nine slots to 22 through Searchlight on $22.9m after seven; I, Tonya fell three places to number 24 through Neon and 30West on $1.3m after three; and A24’s The Florida Project on $5.2m fell three to number 31 after 12. Holiday weekend box office amounted to $241.9m.

This week’s wide release is Ridley Scott’s John Paul Getty drama All The Money In The World through TriStar with Michelle Williams, Christopher Plummer and Mark Wahlberg.