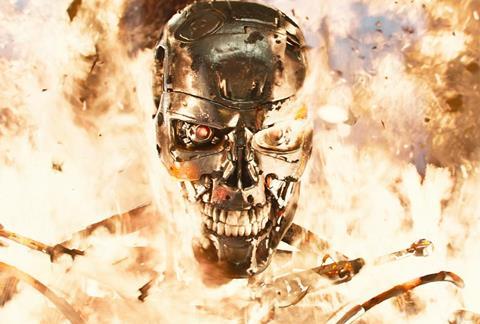 UPDATE: The confirmed $73.3m weekend haul from 46 territories for Paramount and Skydance Productions’ Terminator: Genisys scored the biggest debut for the franchise and Arnold Schwarzenegger in 22 markets.

Terminator: Genisys secured top berth in Russia on $12.5m in 1,774 sites for the biggest franchise, Schwarzenegger and July debut as well as the fifth biggest launch of all time.

In a trio of number two results the sci-fi action arrived in the UK on $5.8m from 979, France on $4m from 815 and Brazil on $3.9m from 1,012. The last territory set new records for the franchise and Schwarzenegger.

Genisys delivered $4.4m at number one in Australia in 484 and $1.5m at number two in the Philippines from 147 for new franchise and Schwarzenegger marks. The same two records fell in Venezuela where $2.4m in 75 delivered Paramount’s second biggest opening weekend.

The film’s global Imax haul stands at $10.2m, while 233 screens have generated $4.7m in the international market. This week it opens in Germany, Japan, Italy and Spain. Studios sources said the budget was $155m.

UPDATE: Minions has taken the baton from Jurassic World to rank as the studio’s top international weekend performer as a confirmed $56.2m from 26 territories boosted the running total after two sessions to $125.1m.

The film stayed top in Brazil and the UK where it has climbed to $16.9m and $32.7m, respectively. In Australia, where it ranks number two, the tally after 18 days has reached $15.2m.

Minions arrives day-and-date with North America this week in 25 territories including France, Mexico and Russia.

Jurassic World grossed $43.3m from 66 territories to propel the international total to $828.4m. The $1.385bn global haul squeezed past the $1.383bn of Avengers: Age Of Ultron into fifth place in the worldwide box office pantheon. Fast & Furious 7 ranks fourth on $1.511bn.

The smash adventure reboot ranks second in China in its fourth and final week of release and added $9.3m for $221.8m and overtook Avatar to become the fourth biggest release in China. Fast & Furious 7 ranks number one on $391m.

Japan will be the final release on August 5.

Sony’s local-language co-production A Monk Comes Down The Mountain (The Monk) from Chen Kaige earned $28m to propel the tally to $34.5m. Hollywood Adventures added $5.8m for a $44m running total and SPL 2 grossed $4m for $85m.

UPDATE: Disney crossed $3bn at the global box office on June 30 – a new speed record for the studio, which has reached the milestone for the last six years now and nine times overall.

Inside Out grossed a confirmed $21.1m from 43 territories to reach an early $120m. The animation stands at $366.2m worldwide and has amassed an estimated $24.9m in Mexico and $17.2m in Russia, where it ranks as the second biggest Disney/Pixar release behind Frozen.

Avengers: Age Of Ultron delivered a confirmed $6.6m in Japan for the biggest debut for a Marvel Universe release and has already exceeded the entire run in Japan of both Thor 2 and Captain America 2. The international running total stands at $926m.

UPDATE: Magic Mike XXL grossed a confirmed $5.9m from 15 markets led by $2.4m in the UK from 907 screens for what the distributor said was roughly on a par with the launch of Magic Mike three years ago.

Far From The Madding Crowd stands at $13.9m.

Insidious: Chapter 3 grossed $2.7m from 51 territories to climb to $42.1m and opened in Germany on $720,000 including previews from 333 screens. The horror arrives this week in France and South Korea.