UPDATED MAY 5: Marvel Studios’ superhero tentpole erupted into 4,276 theatres across North America at the weekend to deliver the second biggest three-day debut in history. 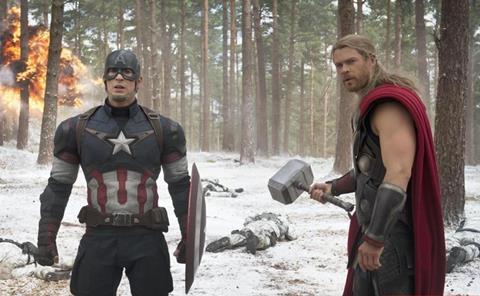 Only predecessor The Avengers in May 2012 has gone higher on $207.4m and the sequel’s early running total after 12 days has already raced to $631m with China to come on May 12.

Disney-Marvel Studios releases now hold the top three spots in the all-time opening weekend pantheon with Iron Man 3 slotting in at number three on $174.1m from May 2013.

Six of the top 10 are superhero adaptations, while two hail from The Hunger Games franchise, the Harry Potter finale ranks fourth and current release Furious 7 rounds out the top 10.

Lakeshore’s romance Age Of Adaline with Blake Lively held firm at number three and stands at $23.4m via Lionsgate after two weekends.

Kristen Wiig starrer Welcome To Me got a strong platform release via Alchemy on $38,000 from two venues.

Clouds Of Sils Maria starring Juliette Binoche and Kristen Stewart expanded by 94 venues into 163 and added $261,667 for $870,950 after four weekends.