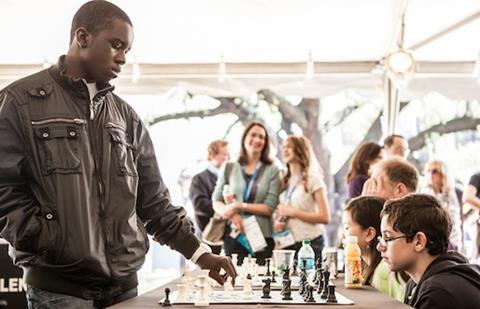 Feature documentary Brooklyn Castle manages the tricky task of turning the story of an inner-city high school chess team into something quietly but genuinely inspiring. While it doesn’t have quite the dramatic or emotional punch of an Undefeated, Hoop Dreams or Spellbound, this engaging entry in the tradition of uplifting documentaries could still find an audience and contend for awards season honours.

Brooklyn Castle focuses on smaller but often quite moving moments of victory and defeat for the kids, their teachers and their parents.

Having already won several prizes - including SXSW’s documentary audience award - on the US festival circuit, the well-crafted production gets a limited US theatrical launch next month. Awards season attention would considerably boost the film’s commercial potential and improve its chances of making a mark internationally. The real commercial potential, however, may lie in the dramatic remake that producer Scott Rudin is developing for Sony.

The New York City junior high school at the centre of the story draws more than 65% of its pupils from families living below the poverty line. But the school’s chess programme has produced some of the country’s highest ranked young players and most successful teams.

Directed by TV documentary maker Katie Dellamaggiore, the film follows five kids of various ages, ethnicities and personalities as they work on their chess games - most of them are already rated better than Albert Einstein was - and try to get into good high schools and universities. Also in the picture are three teachers who are trying to keep the chess programme going in the face of recession-induced budget cuts.

Dellamaggiore uses straight interview footage sparingly and assembles the film largely from scenes in the classroom, on the team’s trips to tournaments around the country and in the kids’ homes.

Chess isn’t very visual, of course, so the film mostly avoids on-the-board ‘action’ and employs on-screen graphics to perk up the tournament sequences.

The nature of the tournaments makes it difficult for the film to build up to a big-game climax the way sports documentaries often do. Instead, Brooklyn Castle focuses on smaller but often quite moving moments of victory and defeat for the kids, their teachers and their parents.