Bucky Larson: Born To Be A Star 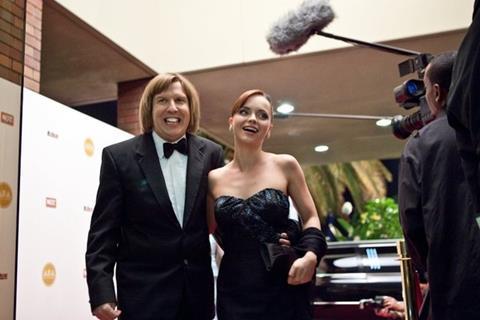 Released in the US without screening for critics, this Columbia Pictures offering will appeal to Sandler fans and those familiar with Swardson from his stand-up career and bit roles in Sandler films like Just Go With It. Still, Bucky Larson would seem to have little crossover appeal, and after what’s presumed to be a disastrous opening-weekend haul this meagre comedy should be quickly retreating to DVD and cable.

While it can be easy to criticise the types of movies Sandler produces through his Happy Madison production company - beyond his own starring vehicles, they’ve also overseen Zookeeper and Paul Blart: Mall Cop - Bucky Larson is in its own special category because of its juvenile tone and threadbare comic spirit. Director Tom Brady, who previously helmed The Comebacks and The Hot Chick, isn’t a filmmaker known for subtlety or emotional nuance, but even on its own raunchy, proudly moronic R-rated terms Bucky Larson can’t muster up much naughty, anarchic glee. Indeed, Bucky Larson might be the tamest laugher ever to feature this many bare breasts and semen jokes.

Another crucial flaw is the casting of Swardson, who also co-wrote the script. Sandler has made room for him in several of his projects, but as a leading man (albeit playing a heavily caricatured character) Swardson displays little comic spark or charisma. Even playing off Ricci, the film’s sole saving grace as Bucky’s potential girlfriend, his one-note performance is terribly off-putting, particularly because Bucky seems stupid and noxious rather than innocent and lovable.