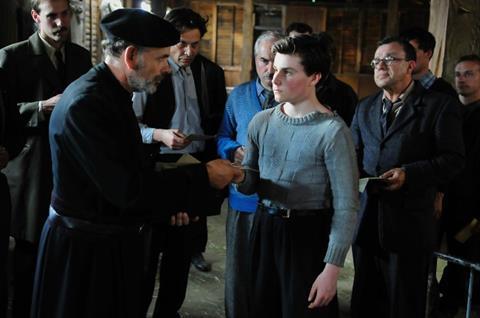 Veteran director Volker Schlöndorff – a pioneer of New German Cinema turned dependable international classicist – offers a conventional yet affecting piece of wartime drama that depicts a bleak incident in Occupied France. The co-production, making uneven use of a German-French ensemble cast, looks at an episode of World War Two that allows Schlöndorff to offer some images of French and German period types (and some real-life figures) that, at their best, offer some variation on the usual war movie characterisations.

The film’s strongest suit is its depiction of life in the camp, where the prisoners show some jovial defiance to their French guards.

While this is a strictly old-school production that verges on the stolid – and at moments is outright clumsy – nevertheless the sense of new light cast on a little-narrated drama should make Calm At Sea (La Mer à l’Aube) a solid middle-brow export.

Made for TV, the film will make its small-screen bow in France in March in the Arte channel but, given the perennial appeal of dramas about the Occupation, the film should flourish at festivals.

Based on real-life events, the film is scripted by Schlöndorff from the writings of journalist Pierre-Louis Basse, German officer and famed author Ernst Jünger and novelist Heinrich Böll, one of whose stories has finds its way into the drama through the character of a young German soldier (played by Otto Matschenz).

The story begins in 1941, in an internment camp in Occupied France where, as well as petty criminals, political prisoners, notably members of the Communist Party, have been imprisoned under the guard of French gendarmes. Among the prisoners are Timbaut (Barbé), a committed Marxist and a senior figure among the internees, and 17-year-old Guy Môquet (newcomer Léo Paul Salmain), a romantically-inclined poetry lover – who in reality became a symbolic martyr figure for Free France, with a Paris Métro station named after him.

In Nantes, three Resistance fighters assassinate a German officer – and, at German HQ in Paris, occupying commander General von Stülpnagel (André Jung) receives orders from Hitler that reprisals must be taken – in the form of the deaths of no less than 150 French. Stülpnagel objects to the measure, as does the fastidious Jünger (Matthes), an aesthete with a love of French culture (and French women: see cameo by Arielle Dombasle).

Nevertheless, it’s decided that a list of 30 victims should be drawn up from the camp – the list including, above all, Communists like Timbaut, but also Môquet and, in a bitter irony, his young friend Lalet (Loizillon), who’s due to be released the next day.

The film’s strongest suit is its depiction of life in the camp, where the prisoners show some jovial defiance to their French guards. There are also some less eye-opening, sometimes clumsily even-handed scenes depicting the ambivalent moral conscience of characters like Jünger and Lecornu (Sébastien Accart), the ineffectual French functionary who objects to drawing up a death list but goes along with his duty nonetheless.

The ever-dependable Jean-Pierre Darroussin draws the short straw dramatically as a priest brought in to offer support to the condemned – and who takes the opportunity to play the voice of consciousness and sanity, explicitly reading various characters the ethical Riot Act.

The film is undeniably stiff and stagey, sometimes downright corny – notably when we hear the superimposed last thoughts of the characters, as they write their farewell letters. But the final firing squad scenes, as three groups of men are dispatched in turn, achieve real dramatic and emotional heft, with the young soldier’s reaction giving the episode an affectingly unusual skew. Among the cast, Salmain is affectingly candid, with French art-house regular Marc Barbé giving his revolutionary diehard an imposing swagger.