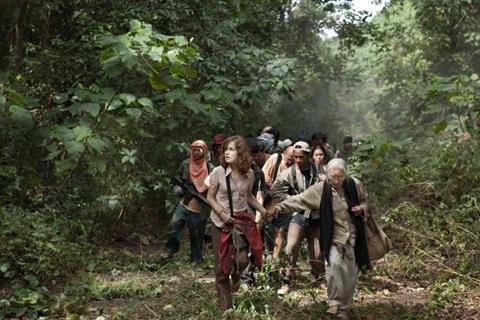 The true story of the kidnapping of 20 hotel guests from the island of Palawan in the Philippines in 2001 gets the verite treatment from Brillante Mendoza in the often powerful Captive. But this lengthy bullet-strewn saga is relentless in its action and starved of the deeper characterisation and human interaction that could have leant insight into the controversial issues of religion and humanity it raises.

Huppert is always beguiling, although too little is revealed about her character and her religious beliefs.

French star Isabelle Huppert – who first met Mendoza when his Kinatay played in Cannes when she was president of the jury - is employed as the central character around whom the twists and turns of the captivity is anchored. The intriguing arthouse combo of Huppert and Mendoza will pique buyers as will the story, which could get media excited, but its hard-hitting reportage style, uneven pacing and unemotional tone will be a tough sell for audiences.

The film is a literal recreation of the 2001 events. On May 27 of that year, the Abu Sayyaf Group (ASG), an Islamic separatist organisation fighting for independence on the island of Mindanao, attacked the Dos Palmas resort on the neighbouring island of Palawan and seized 20 guests and staff. Among them are French Christian social worker Therese Bourgoine (Huppert) and her Filipino colleague, an old woman called Soledad Carpio (Rustica Carpio).

The hostages are transported by boat over several days to the island of Basilan and during the voyage, the kidnappers determine the worth of each of the hostages and what kind of ransoms their families will be able to pay.

Once on Basilan, they are driven by military attacks to the city of Lamitan where they take refuge in a hospital. They kill some of the hostages along the way and pick up three nurses and an orderly on their way out.

About an hour in, the film heads into the jungle – teeming with leeches, snakes, spiders, scorpions etc - where it stays for the remainder of the story. Deep in the mountains, the ASG and their hostages seek a safe hiding place, but the Filipino military is constantly on their trail and the military attacks are so arbitrary that the hostages are as much at risk as their captors.

One by one, the hostages are allowed to go free when their ransoms are paid. Soledad dies in captivity, and two of the nurses are forced into marriage with the ASG members so they can have sex with them. Therese and the remaining hostages wait out their ordeal, as hope dwindles that they will be rescued.

The problem with an extended period of captivity is how to portray it in an hour of film. Mendoza skips through the months in the jungle without managing to describe the boredom or effectively weave together the tentative friendships and attraction that emerge between captives and ASG.

The ASG themselves are more interesting than the captives, and Mendoza portrays them with a balance and humanity that is unusual in a story which Hollywood would have told as simple good versus bad. Huppert is always beguiling, although too little is revealed about her character and her religious beliefs to make her more than mere figurehead for the hostages.