Celestial Wives Of The Meadow Mari 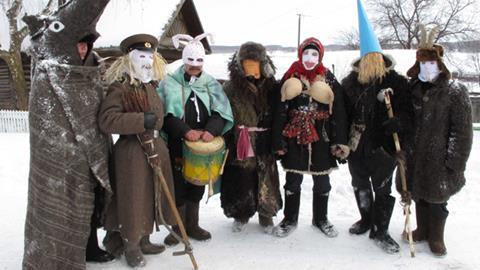 Not all of the many women featured in Alexey Fedorchenko’s film are actually married, though all of them aspire to this status, and none of them is really celestial…delightfully earthy would be a much better definition. But they all belong to that same remote Mari, a Volga-Finnic people living in the north of Russia that no one really heard of before Fedorchenko’s previous feature, the darkly poetical Silent Souls, a hit at Venice two years ago and which walked away with glowing reviews and several awards.

The mood is never less than ebullient, the cheerfully luminous images are always enticing and the women themselves, chosen not for their beauty but for the lively energy emanating from their faces and body language.

Shot entirely on location in a Mari village near Ekaterinburg, with a number of professional Russian actresses joining the local inhabitants and easily catching the spirit of the place, some of the film’s 22 episodes will appear incongruous and pointless while others are both luscious and entertaining.

The landscape, changing in the course of the film from deep winter to glorious summer, and the village itself which looks untainted by time, provide an essential backdrop for this visceral collection of humorous tales, which should easily fit into every folk-inspired film event, though it may have a harder time reaching larger audiences.

A folkloristic romp inspired by the vastly unknown Mari mixture of pagan customs and traditions, at times akin to a Eastern version of the Decameron, Celestial Wives of Meadow Mari (Nebesnye Ženy Lugovykh Mari) offers a collection of brief glimpses, some of them no longer than a single minute, into the lives of these people who somehow managed to bypass many of the doubtful blessings dictated by Christianity, and indeed, there isn’t one single priest or church to provide them with distinct sets of rules to follow.

They still believe in magic birches, shamanic blessings and curses and in mysterious, awe-inspiring spirits of the wood, but whatever they put their trust in, they are all endowed with a tremendous appetite for life in every sense of the world, and certainly of healthy solid sex, which turns out to be the one theme uniting all of these episodes.

Fedorchenko must have had fun all these short stories, changing styles as he moves from one female character to the next, suggesting a different genre for every episode and keeping it all brief and tight, sometimes even too tight for its own good. A one shot episode of a man’s love declaration done over the naked belly of his beloved, while there is an almost mystical tale of a country bumpkin who is duly punished for discovering that the sorceress he was asking for help was not the daughter but the wife of the wind.

An older woman advises a young wife, concerned with her husband’s fidelity, to smell his crotch while a young woman who dared cuddle with her lover next to the holy birch loses all her appetite for life until she goes to beg for the tree’s forgiveness. And there’s more of the same kind, possibly even too much, not all as surprisingly imaginative, sometimes rather inconclusive, often just brief incidents, over before you notice them.

But the mood is never less than ebullient, the cheerfully luminous images are always enticing and the women themselves, chosen not for their beauty but for the lively energy emanating from their faces and body language, the sets look entirely authentic even if they not always are. Altogether this is the right kind of film to have in festivals, brightening up the traditionally grim diet they usually serve.