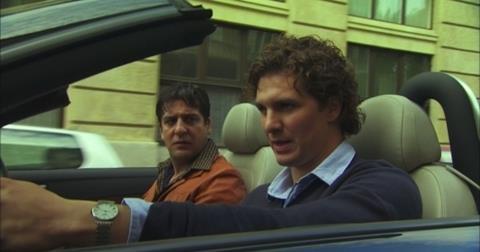 Already selected as Hungary’s submission for the foreign language Oscar this year, Chameleon is an entertaining thriller with western-style production polish, a plot which offers its fair share of surprises, and an impressive lead performance from Ervin Nagy.

Directed with confidence by Krisztina Goda, who is fast becoming her country’s most consistent commercial director (Just Sex And Nothing Else, Children Of Glory), the film was a hit when it opened in Hungary in December last year.

Goda hits the right tone in the film, neither too playful nor too dark.

Chameleon should have some international sales value, especially with the Oscar bid in place, although arthouse distributors are often slow to embrace mainstream local films like this without the guaranteed backing of highbrow critics. Chameleon – unlike recent Hungarian exports Kontroll or Taxidermia – is almost too slick a product, yet bigger independents may also balk at its subtitles. A sale for remake rights seems a natural.

Nagy plays a tall, handsome twentysomething called Gabor who runs a cruel scam with his old orphanage buddy Tibi (Trill). The two work as office cleaners and identify single women from their rubbish; Gabor then seduces them and swindles them out of their savings. The friends are trying to save up to buy a house which, as orphans, they believe is the key to security.

Anxious to make a big money score, the two take on cleaning jobs at the offices of a celebrity analyst. There they target a ballerina called Hanna (Hamori), daughter of a millionaire tycoon, who is trying to overcome a knee injury. Gabor pretends to be a wealthy paediatrician, inveigles his way into her life and spots an opportunity when she says she wants to have expensive knee surgery with a pioneering doctor (Kulka).

He thinks that he can walk away with the $100,000 fee, but the con is more complicated than he imagined.

Goda hits the right tone in the film, neither too playful nor too dark. She makes clear that Gabor is an unsavoury character, yet he is never entirely repellent to the audience, and the director leads us to believe that he is on some kind of redemptive journey before hitting us with a final twist which puts him firmly in his place.

There are a few clumsy plot points, but Nagy’s striking central performance just about carries the drama through its rocky patches. A successful TV and theatre actor, he has enough brooding charm to convince us that women would fall for his act and hints at a turbulent inner life of insecurity, aspiration and desperation for love.

Chameleon is set in a glossy 2008 Budapest of lavish parties, ballet openings, swanky apartments and fast cars, far from the poverty central to recent Hungarian festival favourites such as Iska’s Journey or Fresh Air.