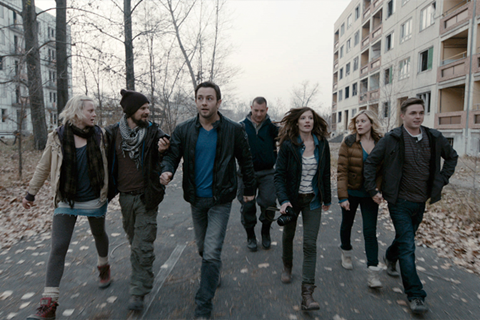 A horror movie that’s mostly tease and not enough payoff, Chernobyl Diaries was co-written and produced by Oren Peli, the man who wrote and directed the original Paranormal Activity, but this new offering lacks the originality that marked that earlier film. Genre fans may be forgiving of the movie’s familiar zombie-style terror, but there’s not enough ingenuity in the storytelling or the scares to frighten up much of an impression.

The so-so Chernobyl Diaries feels like the sort of movie Paranormal Activity was meant to replace.

Opening in the US on May 25, Chernobyl Diaries (which was barely screened in advance for critics) will lean hard on Peli’s clout with horror aficionados, although this Warner Bros. release, unlike Paranormal Activity, isn’t a found-footage film. With no stars to boost its visibility, Chernobyl Diaries will hope to take advantage of the long Memorial Day holiday weekend, not to mention a marketplace without any other horror films. But if Chernobyl fizzles theatrically, it could still be a moderate ancillary performer, with an unrated DVD release seeming almost a certainty.

A group of young people (including lovers Olivia Taylor Dudley and Jesse McCartney) vacationing through Europe decide to take an unauthorised tour of the abandoned city nearby the Chernobyl nuclear power plant that exploded in 1986, devastating the surrounding community. But when their tour guide’s van dies during their visit, they realize that the dilapidated city isn’t deserted after all – and that they’re about to become the targets of a savage group of mysterious creatures.

Directed by first-timer Brad Parker, an effects supervisor, Chernobyl Diaries starts off strongly, if fairly predictably. Like the Hostel films, the action kicks off with a bunch of fun-loving tourists venturing into parts of Europe they don’t understand, with deadly consequences. At first, Parker calmly and deliberately stretches out the tension, hinting at the dangers awaiting the characters but delaying the reveal.

Unfortunately, once it becomes clear that some thing is out there waiting to prey on the characters, the film descends into predictable horror tropes, touching on everything from the conventions of zombie movies to haunted-house clichés. Even the film’s final twist will be unsurprising considering that the whole movie has been raising the suspicion that there’s more going on than first thought.

Horror movies aren’t necessarily prized for their extraordinary performances, but a mediocre offering like Chernobyl Diaries suggests how much more difficult it is to be invested when the characters aren’t involving. While part of the blame rests with Peli and his two co-writers, the film’s cast isn’t compelling enough to resonate, tending toward a bland attractiveness that lacks the necessary depth or pathos when matters start to get far direr in the second half.

Particularly unconvincing is a forced sibling rivalry between McCartney and Jonathan Sadowski that grinds the movie to a halt every time it’s reintroduced. Rather than any of the characters emerging as tough, heroic figures in the face of terror, they tend to shrink, making their plight oddly unsympathetic.

Because Peli helped make found-footage horror films popular again thanks to Paranormal Activity, it may be surprising that he doesn’t use the same format for this new film. (Although, to be fair, he was a producer on the 2011 film Insidious, which also eschewed found-footage.) Parker finds one moment in Chernobyl Diaries to use the gimmick, and it’s striking how effective the brief sequence is. Though an overused dramatic crutch, found-footage horror at its best capitalises on its illusion of immediacy and authenticity to reenergise familiar horror traditions. By comparison, the so-so Chernobyl Diaries feels like the sort of movie Paranormal Activity was meant to replace.