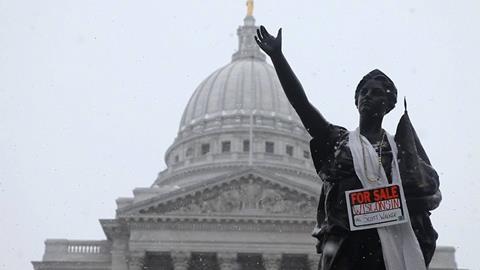 Despite its name, Citizen Koch is not a Koch And Me-like takedown of David and Charles Koch, the billionaire industrialists who have spent hundreds of millions of dollars to influence American politics. Rather, this activist documentary from Carl Deal and Tia Lessin, directors of the Oscar-nominated Trouble The Water, focuses on the battles that took place in Wisconsin, in 2011 and 2012, between Koch supported governor Scott Walker and the Democratic-backed unions and public workers whose collective bargaining rights he successfully stripped.

For a film that takes such a strong stand against such an important issue, there is remarkable little fact-checking on display. This remains consistent with the film’s verite style, but several crucial points remain unexplained.

Lacking the acerbic bite of a film by Michael Moore—with whom Deal and Lessin have collaborated—Citizen Koch works as a straightforward piece of reportage, combining talking head interviews with more verite portraits of public workers and officials trying to fight back against Walker and corporate money. While the topic is worthwhile and the documentary capably debunks right-wing myths about American unions, there are few new revelations here on the topic of money and power. Plus, Moore’s Capitalism: A Love Story did a similar job, and it was a lot more fun.

After some further refining in the editing room, Citizen Koch will likely find some digital distribution in the US, but the documentary’s American-centered topic and less than compelling story structure will make it a tough sell for overseas broadcasters.

The film begins with the infamous Citizens United Supreme Court decision, which allowed corporations to be treated the same as people when it comes to political donations, thereby opening the floodgates for corporate ad-buying in elections. The documentary makes a brief, yet powerful case for a shocking conflict of interest on the Court, as Citizens United once supported Justice Clarence Thomas and his wife directly benefited from the decision.

The rest of the film sticks mostly to Wisconsin, called at the time “ground zero” for the fight between corporate interests and rank-and-file workers. There are some outrageous interviews with Tim Phillips, the president of Americans for Prosperity, the nonprofit organisation founded and funded by the Koch brothers, in which he derides “pampered” public employees and blames the destruction of America on unions. The film shows the repetition of such falsehoods spouted and recycled among the likes of Philips, Walker, Sarah Palin, Rush Limbaugh, Fox News, and a host of right-wing wackos and ideologues at the State level, who say outrageous things in the film, but ultimately do little to further the film’s argument.

The documentary perks up a bit when it gets to former Louisiana Governor Buddy Roemer’s ill-fated presidential bid. A charismatic old-fashioned Republican who was denied access to any of the GOP Presidential debates, Roemer speaks truth to power, offering some great quote: “Money is a weapon,” he says. “And the rich and powerful have more guns than anybody.” The film also includes some colourful secondary characters, such as a pro-life teacher and a corrections officer, both conservatives who feel the Republican Party has abandoned them.

For a film that takes such a strong stand against such an important issue, there is remarkable little fact-checking on display. This remains consistent with the film’s verite style, but several crucial points remain unexplained. For instance, how can an organisation funded by the Koch Brothers be considered a grassroots nonprofit? What exactly are the differences between public employee benefits vs. those of their private counterparts? And most importantly, is there any substantive proof at how much corporate money has corrupted the American political system? After all, just a few months ago, the Koch brothers lost and Obama won.