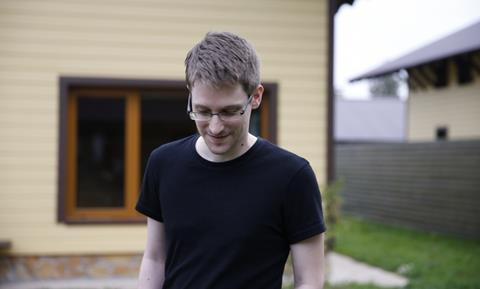 Laura Poitras shot the first two instalments of her national surveillance trilogy, My Country, My Country (2006) and The Oath (2010), in a Sunni neighbourhood of Baghdad and the streets of Sana’a, Yemen, respectively, milieux as striking in their textures and general Otherness as their strife quotient. For the third film, quite possibly the strongest documentary about secret state intervention in private lives, she is confined for a large segment to a nondescript hotel room in Hong Kong.

What is particularly impressive about Snowden is his certainty, his clarity in what he has committed to, and his reasons for doing so.

She has, however, some major pluses going for her: Her subject is arguably the world’s most courageous, or cowardly, person, depending on your point-of-view, former NSA contractor for Booz Allen Hamilton “on loan to the CIA” and whistleblower Edward J. (“I go by Ed”) Snowden; and, like in the earlier works, she opts throughout the film for poignancy rather than heavy-handedness to make authorial points, and for the forceful presence of experts and the previously burned while nearly totally obliterating her own.

The film follows the collaboration of Poitras, Snowden, and former Guardian journalist Glenn Greenwald from the first anonymous e-mails from the self-named “Citizen Four” (Snowden) to the other two through their initial eight-day marathon in Snowden’s room—including a strong bond comprised of affect and trust between Poitras, camera ever in hand, and Snowden—and beyond. (For her, the connection is clear from such shot choices as the top of his head in repose and, more than once, him standing at his hotel-room-prison window, looking wistfully through the translucent curtains down at a large park below; for him, it’s the breaking of the fourth wall, looking at the lens into her eyes for validation.)

Some concrete results of those first meetings were published immediately, and Poitras posted a 12-and-1/2-minute video that she made of Snowden outing himself. Poitras continues filming after Snowden goes underground, then to Russia; Greenwald returns to his home in Rio; and she returns to her apartment in Berlin, where she has relocated to after about 40 no-fly-list detentions flying into and out of the U.S., following a false accusation by a military commander in Iraq during the shoot of My Country, My Country that has clearly fuelled her drive.

Many who have followed this story from the beginning will want to see it in the cinema and not wait for future TV broadcast, especially when positive reviews emerge and elaborate upon its aesthetic merit, engaging thriller set-up, and wealth of information and context made accessible in one seating. This bodes well for RADiUS, which launches the film stateside October 24; and in the UK, for Artificial Eye and BRITDOC Foundation for release as a Film4 coproduction on October 31.

Television prospects are of course even better for a film with so much information to digest. Channel 4 will broadcast in the UK early 2015, HBO in the US at an unspecified date next year. Non-English-language markets might be a little more difficult for theatrical, since television is a more natural home for this type of doc in much of the world (German stations Norddeutscher Rundfunk and Bayerischer Rundfunk are co-producers), yet the Snowden saga has struck such a nerve worldwide that the cinema might prove a perfect home for starters.

Poitras has wisely kept tricks up her sleeve, especially holding back fascinating information until this film came out. For those who have not read a review, there will be surprises: the pretty shocking emergence of another whistleblower (something Snowden had prophesised would happen, “like a hydra;”) and the fact that his partner of 10 years, Lindsay Mills, has been living with him in Moscow.  And even if they have, Poitras places these revelations and structures the entire film, in fact, so deftly that they are still received as if they were new information. (Snowden’s reaction when Greenwald tells him about the leaker called “Citizen” is priceless.)

The encryption in e-mails between Poitras and Snowden that we see on-screen early in the film, while she translates them in voice-over, sets up the generic parallel—with the help of recurring travelling shots of lights at the top of a dark tunnel and a held chord of the slightly fearful type. We are slowly entering, literally, the territory of suspense. Snowden had first tried Greenwald, but the latter was unable to master the secure encryption code; second-choice Poitras was more experienced, out of necessity. The lights themselves are not a random choice: Just when they are finally going to meet Snowden in Hong Kong, their vehicle emerges into the daylight. Poitras has always found beauty in real situations—and in real people. She has a certain touch. In Brazil, for example, when a Greenwald piece on a Snowden leak is on the newsstand, she shoots not the article itself but the lined face of an elderly woman reading it. Hitchcock meets Lubitsch meets…Agnieszka Holland?

Snowden turns out to be emblematic of our electronic age. He is not a dashing hero, nor does he plan to play one. He wears tee-shirts, glasses a wee bit wonky, hair cut in a conservative barber-shop style. (In one charming scene shot in Poitras’s hotel room, Snowden prepares to go into hiding by primping in her bathroom mirror: He has cut off most of his facial stubble, applies loads of gel to his hair, which he combs back, puts in contacts, and looks at himself in black pants and jacket. Now he looks the part of a movie spy.) He is affable, but not edgy, controlled but not tightly wound, especially given that he is the most wanted man on the planet. He has a dry sense of humour, presumably a protective weapon during this difficult period.

This is a 29-year-old from a military family who had the highest possible security clearance—PRIVAC—and chose to risk turning his back on everything he has known for principle. In one sense he is like Poitras: He is loath to foreground himself, to be a distraction. She has an agenda distancing herself not only with a camera but in general; he does not want to get in the way of the issues. It seems that she films Greenwald in all his gregarious mania and verbose enthusiasm to contrast with the softspoken, press-shy ex-contractor—and maybe herself.

What is particularly impressive about Snowden is his certainty, his clarity in what he has committed to, and his reasons for doing so. Without emotion but with sincere regret, he tells Poitras and Greenwald, “I’m designing methods to amplify state power.” He’s particularly riled by the way surveillance has led to the failed promise of the Internet: “It’s become an expectation that we’re being watched—like when search engines limit the boundaries of intellectual exploration.” He knew it was time when “the balance of power has become between the ruler and the ruled, and not the elected and the electorate.” He makes it clear that he has no experience with the media, that all decisions about what should go out and when will be made by them, free from his own biases, the better “to serve the public’s interests.”

Greenwald, Poitras, and The Guardian’s Ewen MacAskill, who was with them in the hotel room for some of the days and provided much-appreciated comic lines, rushed to send out some stories right away. The first was written by Greenwald and appeared June 5, 2013, in The Guardian, the sixth day of the rendezvous. It shook the world. They had the documentation proving that, along with many other surveillance overreaches that had commenced with the Patriot Act after 9/11, Verizon was providing the NSA not only with records of potential terrorists, i.e., persons suspected of committing crimes, but also with every detail from every single customer. On June 6, The Guardian and The Washington Post printed Poitras and Barton Gellman’s story on PRISM, the secret program that allows the government access to user data from a number of servers. And two more before the hotel stay ran out. The Brazilian and German Parliaments would soon be meeting over material that Snowden uncovered and Greenwald wrote up.

For the film, Poitras had the luxury of more time. The project had begun before Snowden contacted her. To address other national surveillance concerns, she uses interviews she had already compiled as well as some she conducted after he changed her life. This doc is not just about “Citizen Four.” He does hold the key to a plethora of documents proving how far the tentacles of the NSA and the UK’s GCHQ extend.

Others, however, have more practical experience than Snowden butting heads with these state organisations. Chief among them is William Binney, former Technical Director at the NSA. He tells of how AT&T provided information on 320 million people, and how he became a pariah trying to make the agency work in a constitutionally acceptable manner. He also tells journalist Jeremy Scahill not to worry, that they are not after him and his colleagues; they just want his sources. Journalist Jacob Appelbaum is a computer security expert who explains “metadata,” how the agency can gather data from all of your cards and “tell a story about you,” a “perception…that will follow you for the rest of your life.” He makes a comment that could speak for the film: “When we lose privacy, we lose liberty.”