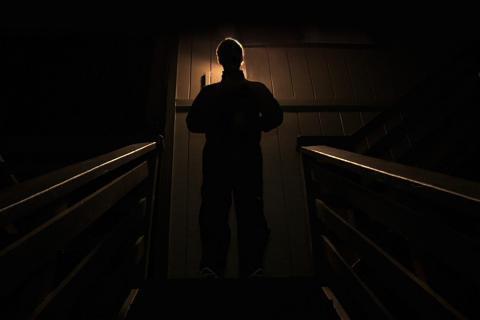 A remarkable two-hander, scripted (and seemingly improvised) by its stars Patrick Brice and Mark Duplass. Though Duplass has a track record as director (Baghead), Brice takes the director spot here. It’s a rare entry in the found footage horror genre that considers who might keep a record of such unpleasant events - though the torments here are mostly subtle, with the one explicit act of violence shown in extreme long-shot and then freeze-framed by the footage’s eventual owner and guilty viewer.

Duplass and Brice have announced that Creep 2 and Creep 3 are in the works, though this first entry in a possible trilogy is impressively complete in itself.

Aaron (Brice) totes video equipment out to a holiday lodge on the edge of attractive and unsinister Californian woods, hired by terminally ill but disturbingly chipper Josef (Duplass) to spend a day filming a memoir to be passed to Josef’s unborn son in a scheme inspired by the film My Life.

Josef is also given to springing repeated joke scares on his video biographer. His disorienting mood swings prompt well-intentioned, slow-fuse Aaron to doubt everything Josef tells him - especially when his car keys disappear. A phone call from Angela (the voice of Katie Hasleton) reveals that she’s Josef’s sister not his wife; she bluntly advises Aaron to get out of the house as soon as possible.

Well aware that a lot of video testament horror movies have been made in the last few years, Creep - not to be confused with Christopher Smith’s 2004 British monster movie of the same title - keeps taking unexpected turns that ease the tension with bizarre comedy or shifts of location. Against the odds, both characters survive their long night together, though their relationship has an attenuated aftermath which involves a stalking that might be malign but could equally suggest an infatuation (Josef, in the persona he most often presents, comes across as possibly gay).

Naturally, the mellow but nervy Aaron is mostly behind the camera - though he records his own diary entries when spooked - and the outgoing, perhaps lonely Josef is centre-screen delivering a quicksilver performance, but Brice and Duplass both give themselves opportunities for acting subtlety. Endlessly patient, Aaron still flashes irritation that might tip over into rage … whereas Josef’s too-easy intimacy and childishness (stripping down for a ‘tubby’ - a bathtime session - with his imaginary baby, putting on the Peachfuzz mask and capering or loitering with mocking menace) occasionally crack to suggest a calculation which might make him more than simply creepy.

Producer Jason Blum has an enviable track record for backing low-budget genre hits that spin off franchises (Paranormal Activity, Insidious, Sinister, The Purge). Duplass and Brice have announced that Creep 2 and Creep 3 are in the works, though this first entry in a possible trilogy is impressively complete in itself.