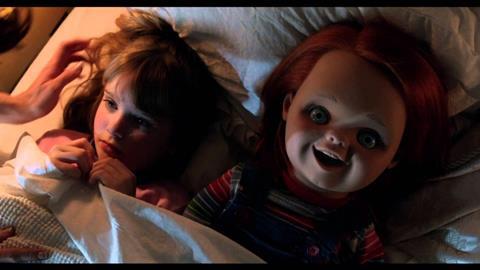 Yes, Chucky the red-haired homicidal talking doll is back, and with typical blood-thirsty mayhem on his mind this latest addition to the hit horror franchise proves to be a fine sequel, trading more on ‘stalker in a spooky house’ themes than on the laughs that have defined some of the more recent Chucky films. The film, which had its world premiere at Montreal’s Fantasia Film Festival, also screens at London’s upcoming  annual FrightFest event.

Curse Of Chucky could well be a ‘haunted house’ tale, except that instead of spooks you have a scarred, red-haired, doll creeping through the dark house and picking up kitchen knives enroute.

Original screenwriter/creator Don Mancini, who took over the director’s chair with 2004’s Seed Of Chucky, having co-written or written every film in the series, has an ease and obvious knowledge for the franchise and has a fine old time layering in the killings against the backdrop of a creepy old house, plus also throws in a few gags and also a tasty cameo at the end that will delight fans. Also back is Brad Dourif who has provided the voice of Chucky since his first appearance in Child’s Play in 1988.

The film opens with a rather large package (guess what it contains?) being delivered to Sarah (Chantal Quesnelle) who lives in a rather gloomy and remote large house with her physically handicapped adult daughter Nica (Fiona Dourif, daughter of Brad, and who plays Casey in True Blood).  When Sarah is found dead the next morning in a pool of her own blood, Nica understandably gets a little upset, but is even more annoyed when her sister Barb (Danielle Bistutti) arrives soon after to suggest selling the family home.

She arrives with hubby Ian (Brennan Elliot), young daughter Alice (newcomer Summer H Howell) and sexy nanny Jill (Maitland McConnell), as well as friendly neighbourhood priest Father Frank (a rather thankless role for A Martinez). Alice takes a shine to Chucky and insists he stays in her room, and before you know it the bodies start falling; little old Chucky begins to exert a control over Alice and wheelchair-bound Alice finds herself stalked through the old dark house with a knife-wielding doll hot on her heels.

Curse Of Chucky could well be a ‘haunted house’ tale, except that instead of spooks you have a scarred, red-haired, doll creeping through the dark house and picking up kitchen knives enroute. Don Mancini hits all of the right horror notes, plays down the laughs (until a cameo at the end) and maintains a pretty high level of tension as Chucky sets about taking nasty revenge on those around him

Fiona Dourif makes for a nicely feisty heroine, with the fact that she is wheelchair bound and unable to feel anything in her legs giving the film a nice twist. As usual, Brad Dourif chips in with just the right amount of crazed vocal relish, while kudos should also go to effects expert Tony Gardner for helping keep one of the movies most unlikely serial killers still interesting.