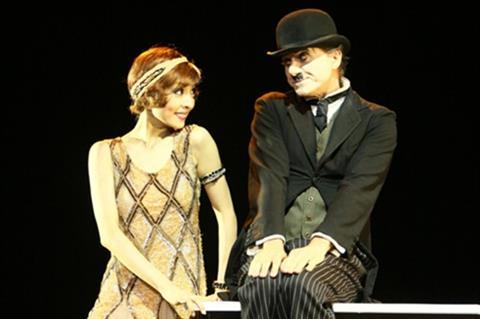 Documentary and dance combine with mixed results in Dancing Chaplin, Suo Masayuki’s filmic staging of a ballet by Roland Petit. Presenting both the extensive preparation in the months leading up to the performance, and then the dance itself, the documentary is engaging in parts, but ultimately leaves the viewer with a greater sense of cinema’s limitations than its potential.

Suo adopts a relaxed, freeform approach, alternating between pre-recorded interviews in Europe and footage of the dancers in Tokyo.

The performance in question is of “Chaplin Dances,” a ballet conceived and choreographed by Roland Petit and performed by Italian dancer Luigi Bonino. Bonino is a charismatic screen presence, especially in the documentary’s first “act,” titled “The Process,” which details the hard work involved in perfecting the dance and its complex movements. He is joined in this made-for-film performance by well-known ballerina Kusakari Tamiyo, the director’s wife and co-star of his breakout 1996 film Shall We Dance? The easy camaraderie between the two, and their obvious commitment to their art, make up the film’s most absorbing moments.

Suo adopts a relaxed, freeform approach, alternating between pre-recorded interviews in Europe and footage of the dancers in Tokyo. He himself also appears on screen, most notably in a disagreement with Roland Petit over whether to shoot a portion of the work outdoors (Petit threatens to leave the project unless the dancers perform in front of a simple black backdrop).

The film’s second act, consisting of the performance itself, is less satisfying. Lacking the immediacy of live theatre, and feeling all the more claustrophobic for being shot within a film studio, the dances lack the personality of the dancers themselves. In several brief moments shot in an outdoor park, it becomes clear that Suo was right in his disagreement with Petit, and that the film could have been much more if he had pushed this concept further and left the studio entirely.