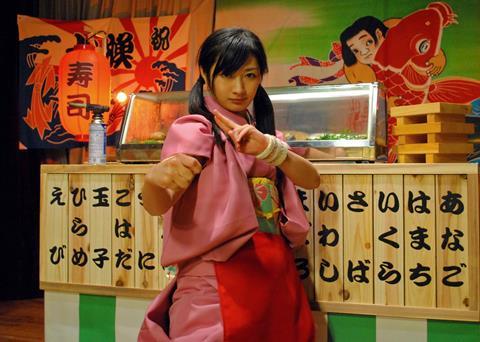 Garish, gory and gleefully silly, the engagingly schlocky Dead Sushi (Deddo sushi) may well be low budget and campy as it blends martial arts with culinary chills, but for fans of any unrepentantly silly Japanese horror/monster films will enjoy its late-night loopiness. Home entertainment may be its primary life, but genre festivals will also be keen to feature it.

The film, which received a warm response at Montreal’s Fantasia Film Festival, may well be cheesy and leering, but it is also brimming with madcap energy. Japanese writer/director Noboru Iguchi (creator of such classics as Zombie Ass: Toilet Of The Dead) makes sure the film moves at such a pace that the sheer garishness helps paper over the thin plot and flimsy effects.

Pretty Keiko (Rina Takeda) has been extensively trained by her tough father in the fine arts of sushi preparation and karate, but his brutal manner gets too much for her and she runs away, ending up finding a job waitressing at a remote rural inn.

She realises that the inn’s sushi chef if not particularly talented, but just as she aims to expose his limitations in front of a tour party from a local pharmaceutical company, horror descends on the inn. Yamada (Kentaro Shimazu), an ex-employee of the company with a grudge to bear arrives at the inn with a serum that turns raw seafood into flying monster/killers.

As the killer sushi starts to fly around the inn and kill off various company workers, Keiko has to try and use her sushi and karate skills to save herself and the survivors. The film veers – or perhaps lurches would be more accurate – between silly special effects and by-the-numbers martial arts sequences, also taking in some sexual titillation and good old-fashioned gore as the killer sushi munch their way through various dodgy company men and women.