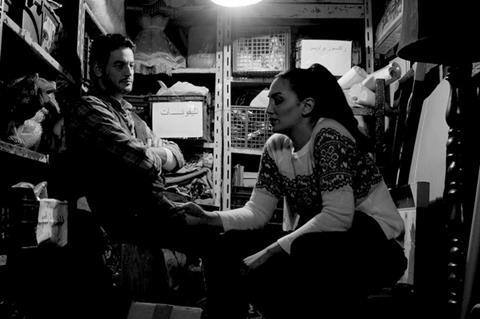 Ahmad Abdalla (Heliopolis, 2013’s Rags And Tatters) crafts a black-and-white homage to his home cinema in Décor, an engrossing, Egyptian take on the Hollywood “woman’s film” which should cement Abdalla’s reputation at home with its core issues of choice – between the past and the present, career, love, duty and family.

Décor is shot in lustrous black and white, however, with more accent on the soft, bleached whites in what is clearly a well-financed, classically-mounted film.

The international marketplace may be more limited for this handsome, Sliding Doors-style story written by Cairo 6, 7, 8’s Sherin and Mohamed Diab. Best suited to festival play, its almost two-hour running time could prove a deterrent to all but the most devoted of Golden Age cineastes (although The Artist’s audience may be tempted into small arthouse play).

With images from old Egyptian films constantly flickering in the background, Décor tells the story of Maha (Horeya Farghaly), an art director who has been hired, with her husband Sherif (Khaled Abol Naga), to work on a commercial B-movie in Cairo.  The production in question – “a film nobody cares about,” according to Sherif - is an attempt by a “festival director” to broaden his appeal, and Maha is being forced to compromise her high standards, much to her dismay.

She’s working day and night on constructing the set – an apartment interior – and is frustrated by the film’s leading actress who insists on wearing luridly coloured clothes to portray a dowdy schoolteacher.

Décor is shot in lustrous black and white, however, with more accent on the soft, bleached whites in what is clearly a well-financed, classically-mounted film. The director of the film-within-a-film may not care about what he is shooting, but Ahmad Abdalla cares a great deal, and Décor is beautiful to look at.

This are many layers to Décor’s plot, and soon Maha is imagining herself into the B-movie’s lead role. But is it imagination or her real life? Her reality shifts and she begins to crumble under the pressure, jolted between her lives as a child-less career woman and wife to the handsome Sherif, and much-loved wife to the portly Mostafa (Maged El Kedwany)and mother of a little girl. Her stature in Sherif’s world, in which which starts out as a confident senior member of the production, becomes diminished as her power as a wife and mother grows in her new second life.

Reality becomes blurred, and the only person to connect the two worlds is Maha’s psychiatrist who urges her to make the right decision and commit to her life. In both worlds, she’s a “movie maniac” who is obsessed by cinema, but she is urged to stop living in the world of black-and-white movies and face reality, even though her story is clearly a classic film construct.

Maha is a woman trying to find her way in today’s Egypt – it’s no coincidence that in the world where she is a teacher and a mother as well as a loving daughter, there is a curfew that restricts her movements. With Sherif, she has had to kill off any idea of a family in order to survive as a career woman. Maha faces a dilemma lived by many screen heroines from the Golden Age through to now, but will the screenwriters make a choice for her? Maha is told “just play along and everything will be alright,” but the writers have written themselves into an interesting corner here.

At 119 minutes, Abdalla tests the audience for a black-and-white domestic drama with a score derived from scratchy scores of Egyptian films that have little if no resonance overseas. But he has drawn warm performances from his three leads, in particular Horeya Farghaly in a classic role they simply don’t write anymore. Also assisting the endeavor are Tarek Hefny’s beautiful images of a slightly bleached, bright Cairo and Alexandria, which take on a silky, old-fashioned feel while capturing an utterly modern landscape