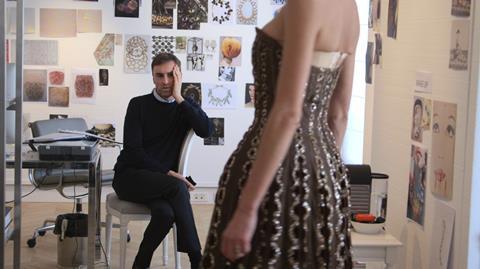 The venerable Parisian couture house Christian Dior gets a makeover in Dior And I, which follows a new design director’s rough journey to the runway. The documentary, by cinematographer Frederic Tcheng (Valentino, Diana Vreeland: The Eye Has To Travel), will draw audiences for its rare glimpse behind the scenes in a domain where the public never ventures.

Dior And I has high production values, befitting a doc about couture made by a cinematographer, although footage on the run conveys the rough pandemonium of what leads to beauty on display.

Its elements are not the most charismatic or cinematic, yet it has style – and any portrait of a designer at work for a legendary label will run ahead of other documentaries in theatres and on television. Dior has consumers wherever people have money to shop, or just look – so will this doc.

Tcheng joins his subject just as the firm has taken on the Belgian Raf Simons (from Jil Sander) as its new design director. Simons, who speaks little French – odd for a Belgian, crazy for the most French of French fashion houses – is a professed minimalist tasked with taking the brand known for sumptuousness and the New Look into the future. How he gets there in his first show is the story.

It’s an odd fit, as Tcheng observes in Simons’s encounters with Dior’s longstanding staff (all French-speaking), and in tight-lipped meetings with the company’s management, in the persons of Sidney Toledano and French LVMH luxury brands zillionaire Bernard Arnault.

There’s another presence here – the voice of Christian Dior – read from his memoir in sonorous French. Just as you won’t hear much that’s critical of Arnault the businessman, you won’t hear anything unflattering about Christian Dior, certainly not his role in dressing the wives of Nazi occupiers in World War II. Also left unmentioned is the anti-Semitic rant by Simons’s predecessor, the extravagant John Galliano, whose ouster as chief designer left a space for the new man. These are major gaps in a film that purports to bring you fashion history.

What Tcheng does give us is the fly on the wall observation of how the tall, urbane, aloof and unexciting Simons rallies the house to show a new line. This a not a leader whom troops would follow up a hill under fire. Nor does he turn on the charm for the camera.

Typically, a runway show is a sprint that only insiders see. One public inspiration for new couture under Simons is Jeff Koons’s Puppy sculpture, a huge cartoonish creation made entirely of flowers. In the studio, the job of converting Koons into couture relies on gifted artisans who have never heard of the artist.

Yet the film’s secret is Dior’s corps in the atelier, prodigious craftspeople and warm-hearted funny veterans of decades on the shop floor with all the zest of Parisians out of Zola, Rene Clair or Jean Renoir. The women are lovable character actors in their first movie appearances, and they make the film more than an airbrushed — albeit entertaining - infomercial.  You can’t get enough of them.

Of course the show goes on – but only after Simons spray-paints a white jacket black (bombing it, as he calls it, using a graffiti artist’s term) with no room to move before showtime. Who knows whether Old Man Dior would have approved? Today’s bosses with a tight bottom line did, or else the scene wouldn’t have been in the film.

Dior And I has high production values, befitting a doc about couture made by a cinematographer, although footage on the run conveys the rough pandemonium of what leads to beauty on display. Wondrous scenes of the actual making of garments remind you that it’s not all about the men at the top.