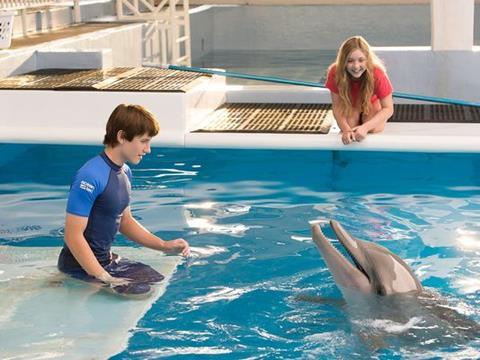 The sequel to surprise 2011 hit Dolphin Tale is another ‘inspired by true events’ proposition, it’s just that this time the events don’t fit quite as neatly or as engagingly into a traditional movie shape. And that leaves this pleasantly old-fashioned family drama – which brings back the original’s amiable human cast and adds a couple of cute new aquatic characters - feeling a bit less winning and a bit more educational than its predecessor.

The arrival at the aquarium of baby dolphin Hope and the team’s efforts to pair her with Winter make for a final act with a tone that’s closer to the rousing, tear-jerking emotion of the original.

Goodwill towards the original should ensure a solid start when worldwide distributor Warner Bros opens the Alcon-produced sequel in the US on September 12, but beating the first film’s $72m domestic run may not be easy. Though the original managed only $23m from international markets heightened title recognition could allow the sequel to top that tally.

A few years on from the events of the first film, Winter, the rescued dolphin with the prosthetic tail, has helped the Florida aquarium run by Dr Clay Haskett (Harry Connick Jr reprising his role) expand and thrive. Winter’s rescuer Sawyer (the returning Nathan Gamble) is now a more confident teen with an important role on the aquarium team and characters including Sawyer’s mother (Ashley Judd) and the designer of Winter’s tail (Morgan Freeman) are still in the picture.

Charles Martin Smith, who returns as director and this time wrote the script as well, sets up several story threads over the film’s first hour: Winter’s aging dolphin companion dies and the team starts a desperate search for a replacement; Sawyer starts to contemplate life in the wider world and maybe a romance with Haskett’s daughter Hazel (Cozi Zuehlsdorff again); and Hazel begins to assert herself with her stubbornly idealistic dad. And between the plot threads the film touches on the question of whether dolphins should be kept in captivity or returned to the wild.

The threads unwind fairly slowly and set a rather somber mood for the film’s first couple of acts. But the arrival at the aquarium of baby dolphin Hope and the team’s efforts to pair her with Winter make for a final act with a tone that’s closer to the rousing, tear-jerking emotion of the original.