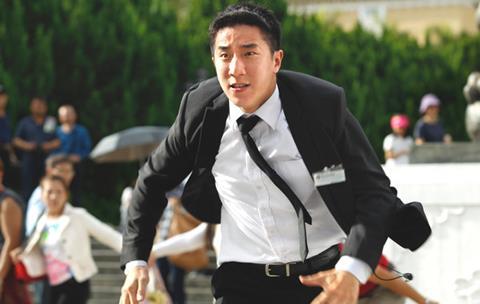 Jaycee Chan, the 29-year-old son of Jackie Chan, headlines Double Trouble, a slickly packaged action comedy that, for both better and worse, gets much of its inspiration from Western sources. Seemingly composed as homage to both the elder Chan’s mismatched-cops Rush Hour series and the recent Ocean’s movies, this lithe genre effort has a surface engagement that melts like a pat of butter as the film winds its way toward its preordained conclusion.

Theatrical box office for this subtitled romp, distributed Stateside by China Lion, will be modest. Its curiosity value owing to Chan’s involvement will ensure it a decent ancillary life, however, particularly in Eastern territories.

When a 400-year-old Chinese painting and Taiwanese national treasure is about to be exhibited to the public, hotshot security guard Jay (Chan) is ready to protect it at all costs. But when a pair of va-voomish, stiletto-heeled, leather-clad gals (Jessica C. and Shoko) make off with the item for their crime boss (Vivian Dawson), Jay gets tangled up with Ocean (Xia Yu), a bumbling Beijing security guard enjoying an all-expenses-paid vacation. Mistakenly assumed to be complicit in the heist, Jay must stick with Ocean and try to track down the valued object, which was stashed in a handbag in Ocean’s tour bus.

Directed by David Hsun-Wei Chang, the action choreographer of Let the Bullets Fly, Double Trouble possesses an unflagging pace, that’s for sure. The movie opens with a flurry of action before characteristically spinning back in narrated time (“Let’s go back two days”) for freeze-frame character introductions and a wild heist-prevention drill. Much of the rest of its action, though, is staged in relatively graceless fashion.

There may be a bit of mostly subtextual social commentary in having one character from mainland China and the other from Taiwan. Unlike last fall’s The Guard, however, in which sparks flew between Brendan Gleeson and Don Cheadle, Double Trouble seems less about honestly dissimilar and abrasive characters, and more about contrived friction.

A good bit of the movie’s humor also leans on physical gags — shots to the groin and what not — that feel like a sop to lowest common denominator international audiences.

Chan, who also contributes the movie’s theme song, “Now,” definitely has some of his father’s goofy, live-wire personality. Too much of Double Trouble’s repartee and humor, however, is as generic as its title.