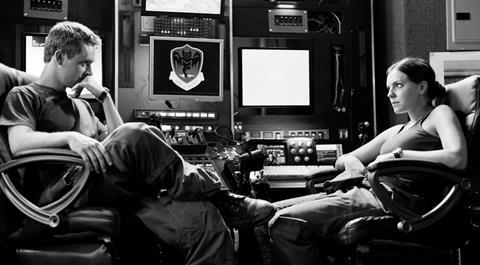 Though it started life as a stage production, the ‘plucked from the headlines’ storymatter of low-budget British film Drones makes for perfect film material as it delves into the moral and ethical dilemmas facing USAF drone pilots as they send their missile-carrying craft into Afghanistan or Pakistan to reign terror on unknowing human targets.

The screenplay by Matt Witten, (who has written for television productions such as House and Homicide) nicely blends real thrills with the complex moral dilemmas about drone warfare.

Matt Witten’s screenplay may, by its origins and nature, feel rather static and stagebound, but given the story is set in real time its sheer tense nature more than makes up for any quibbles about staging. The film premiered at the London Film Festival.

The film is essentially a two-hander, set against the backdrop of a USAF base in Nevada where experienced drone pilot jack (Matt O’Leary) is mentoring Lieutenant Sue Lawson (Eloise Mumford, who featured in TV series The River). She identifies high-level Al-Qaeda target Mahmoud Khalil (Amir Khalighi) from high over Afghanistan, and prepares for a missile attack.

She finds herself in a quandary about the nature of the so-called surgical strike which will mean killing not just Khalil but also innocent victims, and with time tensely drawing in she takes her concerns further up the military chain of command and eventually to her highly decorated father.

The screenplay by Matt Witten, (who has written for television productions such as House and Homicide) nicely blends real thrills with the complex moral dilemmas about drone warfare, and while Jack and Sue’s characters may well be a little simplistic in their ethical divide the questions raised are important ones. It is tense are dramatic story very much of our times and while lacking nuance at times it has the drama (and strong performances) to appeal to distributors and broadcasters.