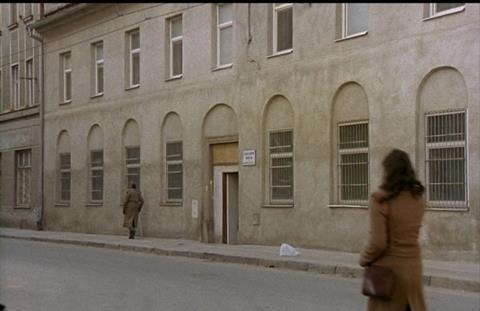 Made with almost no public support, using personal and family funds to cover the low cost expenses of the production and with friends working for free, this debut film bears all the earmarks of a Special Jury Prize (which it was awarded in Thessaloniki)…that is, a film that may not generate much public enthusiasm but is nevertheless highly appreciated by the jury itself.

Kadrnka’s portrait of an oppressive system crushing its subjects to the point they only dream of escaping it is crystal clear.

Eighty Letters (Osmdesat dopisu) will probably get full, unmitigated, support from film critics and travel to every ambitious film event around the world, providing yet another testimony to the fact there is still room for worthwhile independent filmmaking. However, its slow, spare minimalistic approach and the absence of a real plot risks limiting it to hardcore film buffs and cognoscenti only.

Looking for all purposes like an updated Kafka story directed by Chantal Ackerman, Kadrnka’s script (written with Jiri Soukup) goes back to the communist era of 1987 and focuses on just one day, from early morning to nightfall, in the life of a mother (Zuzana Lapcikova) and her adolescent son (Martin Pavius), walking together with grim determination from one official building to another, through their long corridors with closed doors and the grey faced people waiting patiently outside, drab, gloomy, forlorn expressions drained of any hope.

Painstakingly documenting each one of their steps - the time it takes them to get to their destinations is essential to the film’s purpose - Kadrnka’s portrait of an oppressive system crushing its subjects to the point they only dream of escaping it is crystal clear, despite the fact that nothing out of the ordinary seems to take place all through his picture.

A young boy wakes up in the morning, calls his mother but discovers the flat is empty so dresses in a hurry. He rushes down the stairs, runs through one street, crosses another, turns a corner, reaches a bus station, sees one bus about to leave but notices his mother sitting by the window. He knocks on it, she comes out, tells him to go to school, but he claims he doesn’t feel too well, so she asks him whether he would like to join her and both hurry back onto the bus before it drives away.

From this point on, the couple who hardly speak to each other and yet there is never any doubt about their close intimacy, set out on their daily chase to obtain the documents that will eventually allow them to join the father, who is already in England, working in a factory.

The soundtrack underlines their every step, as they proceed from one office to the other, through the bureaucratic labyrinth, the camera always stays with the son, who waits outside, while his mother goes into a room and then comes out, chasing yet another signature or permit, to pile up on the neat stack of documents she already carries with her everywhere she goes.

Incidentally, the only time when the camera follows her in through a door, is when she dictates to a physician, after ascertaining he would listen to her, the text of a certificate she needs from him. All through these proceedings, she holds in her hand a small suitcase whose purpose will be revealed only towards the end.

The only actual dialogue in the film are the texts of the letters she never stops writing, at home, in the bus, patiently waiting before one door or another, a running report on every single detail of her existence for the benefit of her husband with whom she hopes against hope to be re-united.

Laconically allowing the images to speak for themselves, Kadrnka follows the monotonous routine which will evidently be repeated many more times, never allowing editing to take short cuts that might alleviate the heavy effect it is supposed to impart  on the viewer. The sound emphasises the clatter of their steps, images are bathed in a drained pastel palette, and the acting is restrained and understated. Arvo Parth’s music intervenes to add its melancholic weight to a sequence showing mother and son looking at old family photos, and a majestic Johan Sebastian Bach chorale “Ich ruf zu dir, Herr Jesu Christ”, a plea for divine compassion, wraps it all up in style.