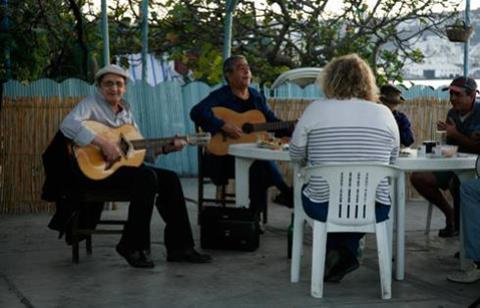 An Algerian variation on The Buena Vista Social Club, writer/director Safinez Bousbia’s uplifting and entertaining El Gusto is a classy music-orientated documentary that, while it touches on many other themes (politics, war, religion etc), always returns to the power and passion of music.

Safinez Bousbia has constructed a film that is fascinating and ultimately moving.

The heart of the story is Bousbia’s ambitious project to reunite a group of Muslim and Jewish musicians some 50 years after their separation after Algerian independence, and tracks their story as they reform into the 42-member El Gusto Orchestra and perform together again in France.The film had its world premiere at the Abu Dhabi Film Festival.

The beautifully shot opening aerial shots of Algiers act as a perfect scene-setter for film, as the camera sweeps in from the sea and into the tangled streets of the old Casbah (in fact the film’s full on-screen title is El Gusto: The Casbah Blues), with Bousbia initially inserting herself into the film’s story.

The Algerian-born director explains how she was wandering through the narrow streets of the Casbah in 2003, and went into a little mirror shop where she met the owner, 83 year-old Mr Ferkioui. Instead of selling her a mirror, he proceeded to show her photographs of a music class at the Conservatory of Algiers from the 1940s, where both Jewish and Muslin musicians were joined together to play ‘Chaabi’, the music of the streets, a blending of Arab, Andalusian, Berber and Flamenco music traditions.

Bousbia set out to track down the surviving members from that photograph, now aged between 72 and 98 and scattered through Algiers, Marseille and Paris. She found them living varied lives, but still driven by their shared passion for Chaabi and desire to be reunited.

Weaving in wonderful footage from the old Casbah and Algiers at the time of the Independence in 1962, El Gusto (which means ‘The Good Mood’) also manages to dwell on Algerian politics and the implications of the war of Independence, which forced the Jewish musicians and their families to flee to France and which saw Chaabi dying in popularity as the Casbah faded in memory.

The elderly musicians are a feisty and passionate bunch, living varied lives but united in their passion for a musical style that defined their early adulthood, and it is appropriate that the film concludes with them reunited in Marseille in 2007 for the first in a string of successful concerts that sees them joyously bring Chaabi back into the limelight.

After her brief flirtation with inserting herself into the story in the opening section, Safinez Bousbia astutely takes a back-seat as the musicians tell their stories, and aided by impressive editing by Francoise Bonnot (who won an Oscar for Best editor for her work on Z by Costa Gavras) has constructed a film that is fascinating and ultimately moving.