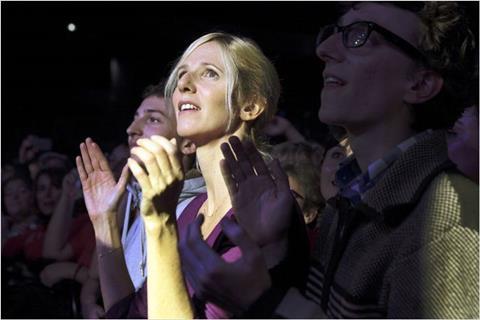 First-time director Jeanne Herry delivers a sardonic comedy propelled by spot-on performances in Elle l’adore, the story of what happens when a very successful French singer calls upon a devoted female fan to help him get out of the kind of delicate situation that could land a guy in prison. Taut comic structure doles out information at just the right pace to keep viewers entertained, engaged and surprised. Sneak previews across France for September 24 release have resulted in all five consumer seals of approval - only the second time that’s happened since last year’s muliti-laurelled hit, Guillaume Gallienne’s Me, Myself and Mum.

This unapologetically amoral tale may make some non-French viewers queasy at first but the director says she set out to portray “the ordinariness of famous people and the originality of supposedly ordinary people” and that’s a mission the film definitely accomplishes.

No less a figure than Cannes Film Festival prez Pierre Lescure pronounced it “the comedy of the year” during the closing ceremony for the Deauville American Film Festival, where it won the Prix Michel d’Ornano, which singles out a film by a first-time French director.  It will be shown at the next edition of City of Lights, City of Angels, but by then it will almost certainly have racked up an impressive number of admissions in France (even though its release coincides with Saint Laurent, Leviathan and Get On Up.)

Sandrine Kiberlain is every bit as funny as she was in her Cesar-winning performance in last year’s 9 Month Stretch. Here she plays easy-going divorced mom Muriel who works in a beauty salon and is given to telling stories that sound like pure fabulation but aren’t completely implausible.

Muriel has been a devoted fan of Vincent Lacroix (Laurent Lafitte) throughout his two decade career, attending his concerts, collecting his recordings and proudly displaying memorabilia.  She’s a sincere fan known to Vincent and treated cordially by his staff, rather than a crazed groupie.

Vincent may underpay his nephew who works as his personal assistant but the singer doesn’t seem like a complete jerk - at least not at first. Intent on protecting his image and reputation when a dicey situation arises, Vincent knocks on Muriel’s door in the middle of the night.  He asks her to drive something in the trunk of a car to a town in Switzerland and deliver it to his sister. Vincent explains that it’s vital that Muriel follow his instructions to the letter. Which she does. It’s just that - as we and Vincent learn after the fact - the letter she ends up following is elsewhere in the alphabet.  Oh-oh.

Meanwhile  a pair of cops who have been romantically involved are assigned to a missing persons case in which both Vincent and Muriel become suspects. Antoine (Pascal Demolon) is possesively nuts about slinky Coline (Olivia Cite), but she’s wildly unclear on the concept of sexual fidelity. The comic gears commence shifting in unpredictable directions.

In a sequence ideal as an audition scene to determine whether aspiring actors possess comic timing, the cops grow increasingly flustered as Muriel deflects their questions and holds up beautifully under the kind of interrogation that would make most people crack be they innocent or guilty. It appears that a lifetime of embellished fibs needn’t go to waste.

Writer-director Herry is herself a conservatory-trained actor. She’s also the daughter of enduringly successful French singer Julien Clerc and veteran French actress Miou-Miou. We never hear Vincent sing a note but his fame, its privileges and its potential drawbacks are neatly etched via convincing details.

This unapologetically amoral tale may make some non-French viewers queasy at first but the director says she set out to portray “the ordinariness of famous people and the originality of supposedly ordinary people” and that’s a mission the film definitely accomplishes.

Whether she’s playing a self-righteous workaholic judge unsure of the paternity of her unborn child in 9 Month Stretch or the imperious Simone de Beauvoir in Violette, Kimberlain melts into her roles. She’s the ideal foil for classically trained Lafitte as a professional entertainer unwilling to see his longevity upended by an incident that would prompt any normally constituted person to call the police. Muriel Mayette-Holtz is spot-on as Vincent’s longtime cleaning woman who turns out to have an eye for the dirt you can scrub away as well as the more recalcitrant variety.